On completion of the seven stages on the programme, 29-year old South African Brett Cummings was the quickest of the eight bikers enrolled on the leg of the Dakar Challenge organised as part of the Australasian Safari. This week, it will be on African soil, from the teams taking part in the Rally of the Pharaohs, where one of the cars will win the right to register for the Dakar 2013.

He is a fast learner. Rally raid events are won thanks to perseverance and tenaciousness. For his first attempt in the discipline, after having made his mark in endurance racing, Brett Cummings has evidently understood this decisive factor. The Dakar Challenge concerned eight riders of the 115 enrolled on the Australasian Safari in the bike category. 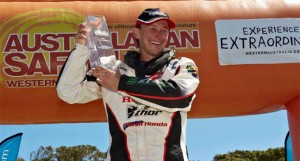 However, it was only two days away from the finish in Geraldton (Western Australia) that the Team GHR Honda rider, who up to then had been waiting in the wings for an opportunity, took advantage of the withdrawal of Vernon Strange. Despite a time penalty of 45 minutes, Cummings still managed to finish the 3,500 km of the route at the head of the Dakar Challenge standings (4 minutes ahead of his nearest pursuer, Melchior Van Heertum !), also picking up 4th position in the general standings, a good distance from Jacob Smith (32nd in the Dakar 2011). Relieved by the outcome of this incredibly tense week, the future guest on the Dakar 2013 was delighted to have been “able to maintain the pace for such a long time. I wasn’t sure that I’d be able to do it, but I genuinely felt I was making progress during the race”. After having left the confines of South Africa to conquer Australia, Cummings can now continue his development on the international scene in South America: “Winning the Dakar Challenge will help me to attract sponsors, and I know that with Team GHR Honda, I’m in the best conditions to tackle the Dakar. I can’t wait to get there”.

For the last step of the Dakar Challenge, a place in the car category will be up for grabs throughout the week along the tracks and dunes of the Rally of the Pharaohs. Out of the 31 vehicles registered, ten have met with the participation criteria set out for the Dakar Challenge. Amongst them, Romanian Costel Sauneanu, behind the wheel of a Mitsubishi Lancer, looks like an ideal candidate, but Egyptian Tarek El Erian is also counting on this race as a springboard to taking his “Bat-mobile” buggy to Lima! 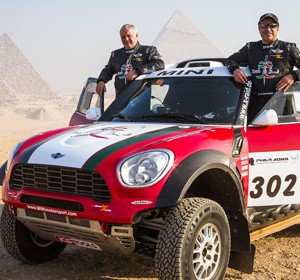