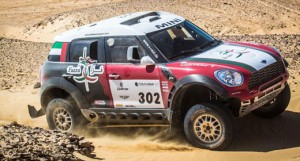 Saeed swept his hand across the desolate landscape in front of us, the dusky skin of his fingers pointing towards the barely discernible horizon. “This is an old land,” he said. “So old that the sand is the bones of stones.” He was right. Hardly a scrub of grass to be seen, no flowers or signs of animal tracks. The only thing that lives here is the heartbroken wind.

Until yesterday the rally looked to be building up to an amazing ending with two of the rally raid world’s titans exchanging blows at the top of the leaderboard… so Schlesser’s exclusion has left an empty feeling of anti-climax hanging over the morning campsite. It’s a rather flat ending to both the rally and the championship. If Al-Mutaiwei cruises to a win here there won’t be enough points for Schlesser in the last round in Portugal as it’s not a marathon event like the Pharaons and is only scored at 25 points for a win, not 50.

Today’s 405km stage wasn’t supposed to be particularly hard but arriving back at the first 2 night’s campsite it looks like a warzone, especially the wind whipping up the sand into clouds of dust that crunches between the teeth. The MD Buggy of Regis Delahaye was dragged in at the end of a tow rope, Boris Gadasin is out as is Costel Casuneanu is out after a bad accident (Note to his father; he’s got a stiff neck but is OK.)

I’ll get to the gory stuff later but the first story I heard was one of the good nature of Kalifa Al-Mutaiwei. The run-away leader could have just cruised through the stage with time for a picnic or two without his hour-long lead being troubled, but 2km from the end he came across new 2nd placed man Regis Delahaye struggling to get up the last hill. He could have just flown by, one more stage closer to the World Cup, but instead he decided to stop and get the tow rope out. But the MINI just kept loosing traction on the hill and sank into the sand. After a few attempts they had to give up. “But then Jun
Mitsuhshi stopped for us,” said Delahaye. “And his Toyota Land Cruiser just pulled us straight up like a tractor! We got back to camp and found that both the drveshafts had snapped.”

It’s a very strange looking result sheet tonight. Sitting proudly at the top is the ever-happy Miroslav Zapletal in his Hummer H3 but when the timing marshal at the end told them they were the first they couldn’t believe it. “For 40km we went the wrong way,” he said. “So we did an extra 80km today! When we realised our mistake we turned around and the point we knew we were on the right way again was when we met Al-Mutaiwei coming over a dune right at us. We know that Andreas Schulz is a great co-driver so we decided to be safe and follow the MINI but then we got a puncture and from there just went slowly and safely. We really didn’t believe the marshal at the end!”

Another big surprise in 2nd are the Kazakhstani pairing of Aidyn Rakhimbayev and Gabdulla Ashimov in their RallyRaid.co.uk Desert Warrior. “Our time is only because of my co-driver,” said Aidyn and his navigator Gadbulla duly explained, “We came to a big field of rocks and all the tracks went to the left… but we went right? Why? Because that’s what they told us to do in the briefing!” Driver Aidyn continued. “We carried on for 35km without seeing anybody and just followed the route to the check point. We went quite fast as we’ve had a problem with the engine for the last few days and we managed to get up to 155km/h. But then we could feel something wrong in the back wheel and started to go a bit slower at the end. When we got back to the service truck we had a look and saw that that lower wishbone was cracked almost all the way through. It wouldn’t have lasted much longer so actually we were very lucky to get to the end!”

And now to the bad news… I found Costel Casuneanu sitting outside his service barge with a neck brace on. “Hello,” he grunted but then like a true racer told me what happened. “We were in 2nd place because we did really well with the navigation and were following Patrick Sireyjol’s buggy at 140km/h. I saw him go a little left and so I went a little right and  there was a dune, only about a metre high, but steep like a little wall. I don’t remember everything but I think we landed on the roof and then rolled quite far. There are no body panels left on the car but the strength of it really saved us!” I could tell that his neck was hurting but he was still in good spirits.

Good spirits though is not what you can say about the G-Force camp. Boris Gadasin was in a secure 3rd and was looking at 2nd today but he wasn’t at the finish. Team manager Marina explained that the power steering belt kept slipping off… which meant that the water pump wasn’t working… which meant that engine temperature kept going sky high. The only option was to turn back to the last CP and wait for the mechanics to come and find them with a tow rope…

Such chaos means that the Top 10 has changed quite a bit with Zapletal jumping up to 3rd, Mitsuhashi to 4th, days ahead of his nearest T2 rival and Sireyjol is up to 5th despite loosing a couple of hours 2 days ago with his oil cooling problems.

There is one last stage to go, ‘just’ 308km to Cairo but the teams disappear into the luxury of the 5* hotel that is waiting at the finish so it might be a little hard to find people for an interview. 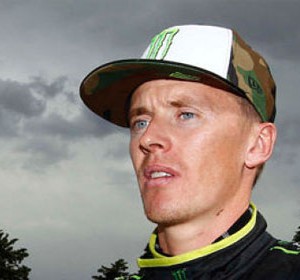