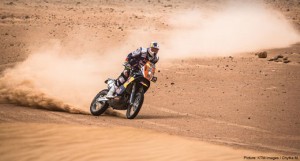 After 6 days of racing, Cyril Despres (KTM Red Bull) has won his 4th Rallye du Maroc, ahead of the Spaniard Joan Barreda and the Chilien Chaleco Lopez.

“I can’t deny that I am particularly pleased to have won this 2012 edition of the Rallye du Maroc, which was far from a foregone conclusion, with a number of factors working against me. First of all there was the sheer number of official teams and riders present on the event. It might be good for the sport, but it doesn’t make winning any easy! Then there was the fact that, for various reasons, I haven’t raced much this year. And finally there was the profile of the event, more sprint than endurance, where I have always gone better on the longer, harder races.

Despite all of that I was on the pace right from the start. The bike went really well and proved it is still more than competitive against all the new arrivals, while the huge depth of experience of my team also clearly paid dividends. In addition, in spite of my lack of race kilometres this year, I felt really good on the bike and it was encouraging to see that all the training I have done since the summer break has paid off. All of which bodes extremely well for the Dakar, now just a few months away. The only downside of the race was Marc’s crash, which forced him out with a dislocated shoulder. I wish him a speedy recovery and have no doubt he will be fighting fit come January.

The Rally du Maroc was billed as the second biggest rally of the year after the Dakar, so hats off to the organisers for rising to the challenge with great organisation and a challenging road book. Their event effectively marks the end of the season, so I would like to take this opportunity to thank all my sponsors for their continuing and unfailing support. It might be a cliché, it is nevertheless true – without them it would be impossible to get to the start line, much less fight for victory.

As I write this pretty much all the other competitors have gone off, while I will be staying until Thursday. Apart from a new rear shock to test, there isn’t much to do on the bike, which means I will be able to give my full attention to the impressive 15 man Red Bull film crew that has just turned up to film a Dakar preview clip. If the amount of material they have bought with them is anything to go by, the finished result should definitely be worth watching!” 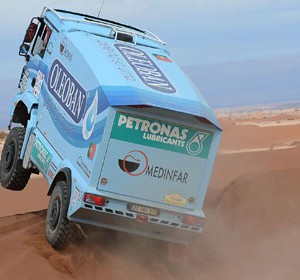