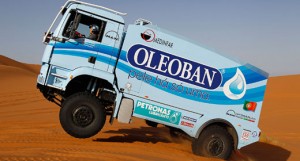 Team Oleoban/ MAN Portugal is getting everything ready for its entering Oilibya du Maroc Rally, which starts on the 14th of October next. This competition will be among 11 trucks and about 60 cars, with the expectation of a good fight within the car/truck category. As it happened last year, the Portuguese team will be confronted with other top teams. Team De Rooy, which includes race drivers Gérard De Rooy and Massimo Biasion (this Italian driver being former rally champion and last year winner), and Team X-Dakar and Hans Bekx will compete for the best places.

In spite of such strong opponents, Elisabete Jacinto is determined to get to a podium position: “This competition is going to be very hard. Among those enrolled there are very strong drivers and teams, with highly prepared trucks, which are themselves lighter and considerably more powerful than ours. To begin with, these teams have some advantage over us. I know it is going to be a rather fierce contest but we are going to keep focused on our main objective”, states the Lusitanian race driver. 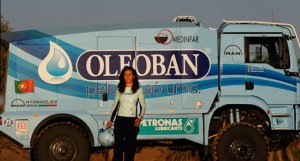 Jorge Gil, who is the team coordinator thinks it is possible to reach that aim: “We are aware of the fact that it is going to be a great challenge. However, our objective is always to fight for a good classification. I have a deep trust in our team and its already long experience, and I know the wide variety of ground as well as good navigation may be factors to play in our favour.”

Oilibya Maroc 2012 Rally is going to run about 2 000 kilometers between Erfoud and Zagorah. It comprises six stages which include very stony tracks, convoluted mountain trails and crossing sand. Erg Chebbi and Erg Cheggaga are the main challenges.  This will be the last competition for Team Oleoban/MAN Portugal before Africa Eco Race 2013, which will take place between December the 27the and January 9th 2013. 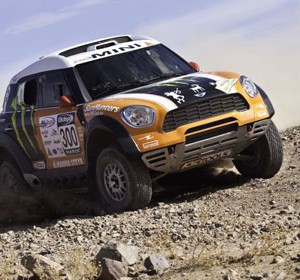 Before the beginning of the most famous sandy race of autumn – OiLibya Rallye du Maroc 2012 the pleasant news appeared...
Copyright 2011-2016 Rallyraid.net - RISE Network. All Right Reserved.
Back to top