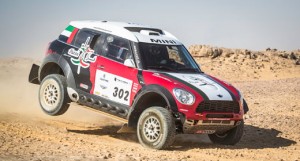 Dubai’s Khalifa Al-Mutaiwei and German co-driver Andreas Schulz were on track to extend their advantage over arch rival Jean-Louis Schlesser in the Pharoahs International Cross-Country Rally at the fourth passage control of the third selective section between Tibniya and Abu Mingar on Wednesday.

“I am happy with the way my rally has begun,” said Al-Mutaiwei, who drives a Mini All4 Racing prepared by the Dakar-winning X-raid team from Germany. “There is still a long way to go and it is still too early to make any predictions. Today’s stage was very long and rough and demanding for my concentration. I also had to be cautious not to make any mistakes.”

The Fazza Rally Team star saw his overall lead reduced to just 5min 40sec after the second stage around Tibniya on Tuesday, but he had the advantage of following closest rival Jean-Louis Schlesser into the daunting third 582km stage to Abu Mingar on Wednesday.

Frenchman Patrick Sireyjol held third position, 7min 38sec behind Al-Mutaiwei, and also started in front of the Emirati. Regis Delahaye and Russian Boris Gadasin rounded off the top five in the overall standings at the start of the day.

Al-Mutaiwei began the stage third on the road and had dropped just five seconds to Schlesser through the first passage control. Gadasin was running closely behind the Emirati on the stage. By PC2, Al-Mutaiwei had overtaken Schlesser to take the virtual stage lead and, at the third checkpoint, he was running around two and a half minutes in front of the Frenchman.

As the leading cars arrived at PC4, Schlesser had dropped even more time and was over six minutes behind the Dubai driver heading into the closing kilometres of the desert stage. That gave Al-Mutaiwei a virtual overall lead of over 11 minutes.

Teams will tackle a fourth loop section around Abu Mingar on Thursday. The penultimate special forges its way across the desert towards Tibniya on Friday and the final stage on Saturday, October 6th heads from Tibniya to Cairo, where the podium finish will take place in the afternoon. 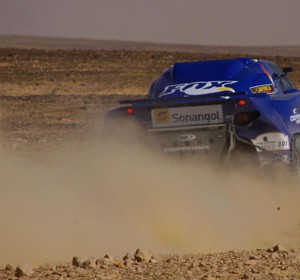 After loosing some 20 minutes with a technical problem yesterday there was only one thing that Jean-Louis Schlesser could...
Copyright 2011-2016 Rallyraid.net - RISE Network. All Right Reserved.
Back to top