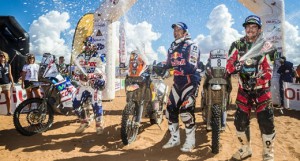 Helder Rodrigues finished with a win, the same “scream” used on October 15 for the first page of the Rally of Morocco, special edition, 2012. That day the portuguese has gave to the HRC Team the success of the opening Special, in the same day of the long awaited return of Honda. Second is Juan Pedrero, water carrier of Marc Coma, which stores an unlucky race, which began with a fall, continued with the injury of his “Master” and finished with a penalty for a jumped waypoint. And third, finally, Cyril Despres, who won the second leg but then did not do anything exceptional in the days that followed, but to resume the leadership at the end of the fourth stage and save it until the finish line, and to demonstrate an “exceptional” ability also… to be wrong. He, too, four Dakar in his palmares and a season dedicated more to the show that to the stopwatch. But this is the story, in which it is written that there is no random winner in a Rally… by chance. Depres exploited his best “master” skills, running the track easy protected from any risks and remaining perfectly tuned on the final goal.

So the rally ended with the victory of Cyril Despres, and composes a podium on which three different types of certainties are materialized. One. The old original certainty of the extraordinary force of an extraordinary champion, Cyril Despres. Two. The new certainty represented by the effectiveness of the new name of the Great Rallyes, Joan Barreda. Three. The reassuring certainty of the renewed, full competitiveness of Francisco Lopez. With his third place in Morocco the Rider Bordone-Ferrari Racing Team closes, and you would say definitely, a difficult cycle that began with the crash of the 2011 Tunisia rally. He is now projected among the big favorites for the next Peru and Argentina, but mainly Chilean, Dakar. In every respect it is a podium that gives a great prestige to the discipline. Maybe a little unhappy was, perhaps, only Honda, which alluded to the possibility of a stunning blow to the Rally, but once again the value of the commitment of a big Factory is shown.

As the only Italian participant in the Rally of Morocco, Alessandro Botturi played his part so well. The Bordone-Ferrari Racing Team Rider had no objective linked to the result, and was not perfectly assisted by luck. On two occasions Botturi has done more than required by his apprenticeship course, leading the platoon for a full stage and charging himself of the navigation duties, and finally controlling a long final stage when a malfunction of the front fork of his bike put him under a lot of risk. The only Italian in the race, ninth in the final stage and twelfth in the overall standings, can be now considered as the best Italian a Dakar perspective.

The Bordone-Ferrari Racing Team took half of the team in Morocco, focusing on a reduced potential mainly due to the accident occurred to Jordi Viladoms, who still finished on the podium in Egypt, and with bikes that had an entire season of World Championship on his shoulders. In Morocco, the team has tested a strong core, strongly representative of the fire front that has built up in less than a year of operation. The podium of Francisco Lopez is the other half of the work, because the Team has recovered and recycled in terms of motivation, a class Rider marked by the accident of the Tunisia Rally of last year. Mechanics, technicians and the manager of the Rally Team, Jordi Arcarons, have completed with success another campaign. Another battle, of course, because the real war declared by Bordone-Ferrari Racing team will be that Dakar starting January 5, 2013. For the “Great War”, now missing a handful of weeks, all the final tactical lines will be defined in the next days. At the start there will be four Riders, since the program of the Rally Team will include the fifth Rider most likely deployed in the Africa Race.

Francisco “Chaleco” Lopez. “There was one Rally when I never thought to result, even when the ups and downs of my opponents have opened sensational gates to my passage. My goal was to run the same way I have done throughout the year in the Chilean desert, against myself, and only occasionally comparing my performance to the other ones. This is because the speed, the fatigue strength and tightness of the concentration are more important than the pure performance. Especially in a long and stressful race like the Dakar. In this regard I am fully satisfied and confident for the future. As Rider I feel completely recovered, and the formula of the final result, very excellent, is obtained only with this part, though fundamental, of ingredients. I have not missed a single important note, I have not lost time, I was focused on the road book without ever yielding to the temptation to sprint with my opponents, and I learned to keep cool in every circumnstancies. This is the “real” speed I found in Morocco. Now I am ready for the Dakar.”

Alessandro Botturi. “I’m happy, as always when I realize that I have brought home another piece of experience. The last stage does not count. It was an easy stage. Easy because short, and without any particular pitfall. Easy because I put a standard front fork, without any special or custom settings. Under these conditions the ninth place of the last fraction is to be considered excellent, achieved only with the rhythm and with a good step. I would be inclined to think that I’m ready for the Dakar, but I would not to seem presumptuous. I will realize the obhectivity only after the start, just a year since my first Dakar. Only then I will have a real feedback on the progress of a year’s work. Inwardly, however, I am very confident. The Team did a great job, and it has provided to me exceptional “training”, “tools” and “trainer”. How can I let them down?” 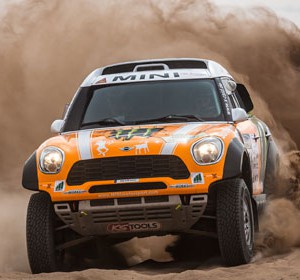 Following the Oilybia Rally of Morocco, the Monster Energy X-raid Team leaves Morocco with mixed feelings. At the end of the 2000-kilometre...
Copyright 2011-2016 Rallyraid.net - RISE Network. All Right Reserved.
Back to top