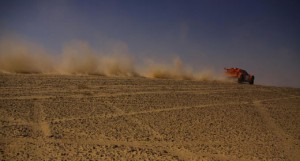 I don’t know what the requirements for being able to call an event a legend, but I think the Pharoans Rally should be on the list as it is older than some of the competitors. Held in the empty wastes of Egypt the event is now in it’s 30th year!

The start has one of the most spectacular backdrops of any motorsport event in the world with the FIA banners and country flags fluttering in front of the pyramids of Giza. There’s now other way to describe it, it’s an absolutely stunning sight. Jean-Louis Schlesser, a man as close to rally-raid royalty as you’re likely to get, was first in line but UAE rival Kalifa Al-Mutaiwei was the local press’s favourite. The Faaza Rally Team driver is chasing Schlesser for the World Cup, (if
the genial Frenchman beats Al-Mutaiwei by more than 3 points he’ll be crowned the champion, but if not the fight will go to the Portalegre 500 in Portugal).

Teams from as far and wide as Kazaksthan, Japan and Brazil came to the famous plateau to be waved off and a big crowd pressed in to see the Egyptian prime minister drape the national flag over the windscreens. There was time for few photos in the crowd as chaotic as the Cairo traffic and then it was off to the start of the first stage… No little dalliance around a spectator-friendly Super Special here, just straight out into the desert with a 330km stage. According to the organisers it wasn’t the toughest test the competitors will face this week, but a long one.

As championship leader it was Schlesser in his Sonangol buggy who was first to go, the 7 litre V8 carried on the wind before the blue machine came into view and then Al-Mutaiwei doing what he said he would in the briefing last night; chasing his hero… and he was visibly trying harder, the MINI All4 airborne where the buggy ahead only lifted a wheel.

A distant, but very credible third in the championship meant that Russia’s Boris Gadasin went 3rd in his G-Force Proto but his engine sounded as it had a bit of a misfire… which was still much better than team mate Vladimir Vasiliev’s… the first round winner in Italy ground to a halt with terminal engine failure after just 40km. The team were hoping to do well here as the Team’s World Cup was in their reach…

In T2 (production class) it was Jun Mitsuhashi, (who last year was running an amazing 3rd overall before mechanical failure robbed him of a shock result) and he was pushing hard, ahead of many much more modified cars.

From near the start our next stop was a point 270km into the stage and we watched some of the straggling bikes on the gravel against a beautiful backdrop of bright white dunes… until in a giant cloud of dust Al-Mutaiwei came over the horizon. He was really pushing, drifting the MINI on the winding track between the small rises… and then by my watch it was 16 minutes before the next car came, Schlesser, Patrick Sireyjol in his SMG Buggy and Gadasin in his badly misfiring G-Force… followed by the ever impressive Mitsuhashi.

Last in the evening we got into camp and I walked around looking for people to interview. Friendly Romainan driver Costel Casuneanu had a picnic arrayed on his table as his mechanics dusted off his Mitsubishi Racing Lancer. “First dune and we got stuck,” he shrugged. “We said hello, she said… Well, w had the sun in our eyes and couldn’t quite see the top so slowed down a bit too much. We used the tracks and then followed Mitsuashi for about 100km, but then the yellow buggy came past and was so close that he smashed our window with stones. After that we found a rhythm because it’s only day 1, there are another 5 to go and we don’t want to go home just yet.”

It was a slightly lonely looking G-Force camp with just one car and a few mechanics as the others were pulling Vasiliev’s stricken car out of the stage. Gadasin said, “It wasn’t such an interesting stage for us, just 30 and 40km of straight tracks which is perfect territory for the buggies. But to make it a bit more interesting for ourselves we snapped the gear lever off at CP 1 and did the rest of the stage in 4th gear!”

Jun Mitsuhashi was all smiles though and even surprised himself by finishing 4th. “I made a little mistake. I saw a rock and thought it would be OK to drive over it but it burst the tyre in the middle and we lost 4 minutes changing it. Normally it takes a little while to get into a rhythm but actually I am quite happy with how I did for the first day… and tomorrow is a harder stage which will suit us so I am quite confident now!”

Jean-Louis Schlesser had long gone to the local hotel by the time we rolled into camp but he lost 21 minutes today because of a battery fault. He stalled on a dune and couldn’t get restarted again and had to wait for Patrick Sireyjol to come with a tow rope and give him a bump start. And as Gadasin said, apart from Al-Mutaiwei winning it was a day of the buggies as in 2nd and 3rd the fast and flat tracks well suited for the powerful rear wheel drive cars… but this won’t be the
case for tomorrow. The roadbook is full of warnings and cautions, there are many dunes, rocks and big descents much more 4×4 country than buggy land. A 347km loop out of the camp and back again. 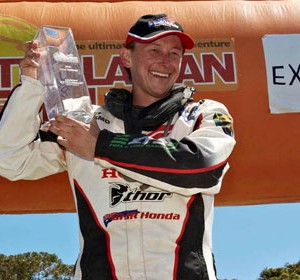 On completion of the seven stages on the programme, 29-year old South African Brett Cummings was the quickest of the eight...
Copyright 2011-2016 Rallyraid.net - RISE Network. All Right Reserved.
Back to top