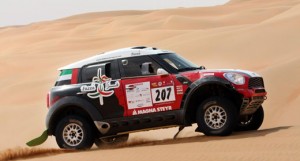 Dubai’s Khalifa Al-Mutaiwei and German co-driver Andreas Schulz set the fastest time on the first 547km selective section of the Pharoahs International Cross-Country Rally between Cairo and Tibniya in the Egyptian desert on Monday.

“Before the stage I was not feeling well and did not want to push too hard so to win the stage was a bonus,” said Al-Mutaiwei, who led from the start of the opening special stage in his X-raid Mini All4 Racing and now leads title rival Jean-Louis Schlesser by 21min 45sec. “There is still a long way to go but it has been a good start.”

Al-Mutaiwei began superbly in his quest to clinch the FIA World Cup title on Egyptian soil. The Fazza Rally Team driver led Schlesser by 1min 23sec through the first passage control point and extended that virtual lead to 1min 53sec through PC2.

Schlesser was delayed on the run through the desert between PC2 and PC3 and Al-Mutaiwei reached the third checkpoint 5min 35sec in front of Frenchman Regis Delahaye, with Schlesser more than 22 minutes behind the Emirati.

Al-Mutaiwei maintained his composure through the latter kilometres of the stage and reached the penultimate checkpoint in 2hrs 21min 54sec to stay on course for the stage win. Russian Vladimir Vasilyev was already in trouble on the special stage and Frenchman Patrick Sireyol was running in third overall.

Al-Mutaiwei completed the stage in 2hrs 47min 17sec to secure the stage win and a perfect start to his Egyptian campaign. Delahaye finished the day in second overall, 7min 25sec behind Al-Mutaiwei, and Sireyol was third.

Crews will tackle a desert loop stage around the Tibniya bivouac on Tuesday and then the route heads from Tibniya to Abu Mingar on Wednesday. The fourth stage is a loop section around Abu Mingar on Thursday and the penultimate special forges its way across the desert towards Tibniya on Friday.

The final stage on Saturday, October 6th heads from Tibniya to Cairo, where the podium finish will take place in the afternoon. 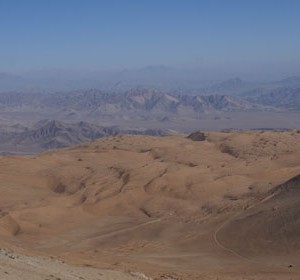 When preparing the terrain for the Dakar’s riders, drivers and crews, the stage of writing the road-book is crucial. This...
Copyright 2011-2016 Rallyraid.net - RISE Network. All Right Reserved.
Back to top