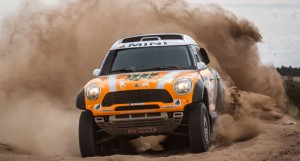 Following the Oilybia Rally of Morocco, the Monster Energy X-raid Team leaves Morocco with mixed feelings. At the end of the 2000-kilometre event, the Russian pairing Leonid Novitskiy and Oleg Tyupenkin finished second behind Frenchman Eric Vigoroux, with their orange MINI ALL4 Racing. And while Chile’s Boris Garafulic and his French navigator Gilles Picard also secured a pleasing result by finishing fourth, with their BMW X3 CC, Krzystof Holowczyc and his Portuguese co-driver Filipe Palmeiro had to cope with a big dose of bad luck. Having secured two special-stage wins on the first four days, they held a promising position in the battle for the overall win, with their white MINI ALL4 Racing – but in the penultimate special stage, gearbox problems made a sudden end to their dreams of making it to highest step on the podium.

For Novitskiy and his co-driver, it was a special rally and finishing runner-up represented a major success, for them. Three years ago, the two Russians had a serious crash in the Rally Tunis and since then, Tyupenkin hadn’t contested a rally. So, the 2012 Oilybia Rally of Morocco marked his comeback as co-driver. But the pairing quickly found back to a smooth cooperation and improved special stage by special stage.

Things looked promising for Holowczyc: after having finished second in special stage one, the Pole upped the ante by winning the second. A puncture in the following special stage cost him some time, but he struck back with another special-stage win on day four. The overall win seemed to be within reach but just a few kilometres after the start into the fifth special stage, gearbox problems cost Holowczyc a lot of time and positions. Nonetheless, the Pole demonstrated his competitiveness and fighting spirit by also winning the final special stage.

“With three special-stage wins, Krzysztof demonstrated his skills and without the problem, he definitely could have won the rally,” said Monster Energy X-raid Team Manager Sven Quandt. “Now we have to analyse what went wrong to make sure that we won’t encounter such a problem in the Dakar. At the same time, I have to praise the performance of Leonid and Oleg. They haven’t cooperated for three years and in consideration of this fact, their performance was really good. And Boris also once again impressed with a consistent performance.” 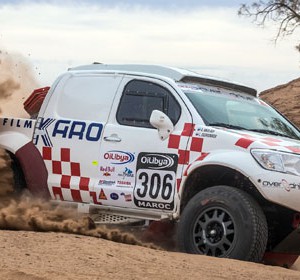 Three of the four Toyota Hiluxes entered by Overdrive Racing in the punishing 2012 OiLibya Rally of Morocco finished the six-day...
Copyright 2011-2016 Rallyraid.net - RISE Network. All Right Reserved.
Back to top