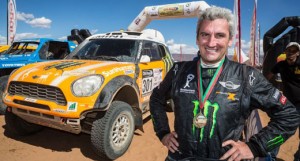 After six days of the most interesting African race in Morocco, Russian “duo Leonid Novitskiy/Oleg Tyupenkin (Mini All4 Racing)” reached the podium with a second place in overall! The crew achieved such result in the persistent battle against skilled and strong rivals.

Novitskiy and Tyupenkin started the race with some navigation mistakes and a penalty of 30 minutes for exceeding the speed limit during the first special stage. As result, only the 9th position after first day of rally. However, some other well-known competitors got a penalty for a speed infraction – Peter Van Merkshtein (Toyota Hilux), Eric Van Loon (Mitsubishi Lancer) and the truck of Miki Biason (Iveco).

In the second day Russians managed to improve their position after successfully passed sands and dunes of Erg Chebbi in Erfoud, and to rise by the 6th place while other rivals had some problems. The teammate Boris Garafulic (BMW X3CC) stuck in a dune, having lost more than 20 minutes, and the crew of the Polish pilot Szymon Ruta on Overdrive Toyota  caught a hole and roll over his Toyota, having seriously damaged the car.

In sports aspect the first two stages were rather difficult in navigation, and considering a three-year break in races for Oleg Tyupenkin, to avoid several mistakes was impossible. On the 3rd stage, Russians pushed hard and went on ascending, finished the first half of race on fourth position after race leader Eric Vigouroux (Protruck), Krzysztof Holowczyc (Mini) and Guilherme Spinelli (Mitsubishi Lancer).

«Oleg already well adapts and quickly enough enters into a race rhythm therefore I hope that every next day we will have less mistakes and the result becomes even better. In the second half of race we expect more sands and dunes where it will be easier to both of us to work so we will try to improve the time» – commented Novitskiy on the finish of the third stage. 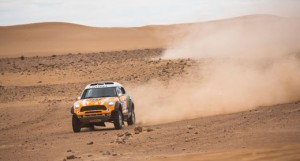 Really it happened so, the fourth and fifth stages of rally passed in well-known erg of Chegaga where the Russian “duo” acted simply excellent, having finished with the third and the second results at stages. While the main rivals lost time. Brazilian Spinelli had to take off from some sandy traps and lost time in navigation mistakes, and Holowczyc forced to stop at fifth stage with mechanical problems with transmission on his Mini.

As result, before a final special stage with a distance of 171 km Novitskiy hold the second place of the general ranking, after 42 minutes behind the leader Eric Vigouroux and with advantage ahead of Spinelli for 8,5 minutes. Leaving from the start line of the sixth, final stage the crew was in a maximum concentration, as any mistake in navigation or driving could take back the reached result. More over Spinelli rushed off in attack from the first kilometers, hoping to recoup. But all three leaders saved their positions, even Novitskiy already started to catch up on Vigouroux’s time which stopped on the special stage because of technical problems with Protruck. But the Frenchman after all finished and kept nearly 18 minutes of advantage ahead of Novitskiy and Tyupenkin and 23 minutes ahead of Spinelli.

L.Novitskiy: «We enjoyed the race and got a great experience and impressions. It is necessary to note that this year NPO made a perfect route, having included new interesting regions and tracks which never used before. Therefore rally became unpredictable and passed in a high competitive level. Me and Oleg worked very hard, and in a short time he could adapt for working on the route, and for me Morocco traditionally passes with a main goal – to test myself before “Dakar” and each year I am adjusted on start of the main race of the season».

So after race in Morocco the team Monster Energy X-Raid with Leonid Novitskiy in the staff returned to Trebur to organize a final preparation for «Dakar-2013». 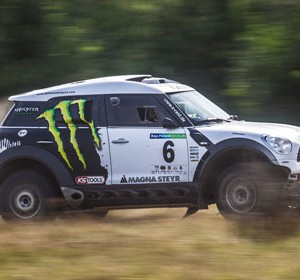 It’s back-to-back action for X-raid, now. Just a week after Khalifa Al Mutaiwei having won in Egypt with his MINI ALL4...
Copyright 2011-2016 Rallyraid.net - RISE Network. All Right Reserved.
Back to top