Race-dezert.com._  Undeniably known for being one of the most iconic and well-known races in the world. The Baja 1000 will put man, machine and nature against each other once again.

On Thursday November 15, 2012 over three hundred racers from 32 different states and 18 countries will line up on the streets of Ensenada Mexico in Baja California for the 45th annual running of the Baja 1000. Racers from all different walks of life will take the green flag at approximately 11:30am (Pacific standard time) and embark on a 1,121-mile journey down the beautiful Baja California Peninsula. Just as in the 2010 Baja 1000, this year’s race will end in La Paz Mexico; located near the Gulf of California. Competitors will be required to hit all 8 mandatory checkpoint locations as they traverse there way though the harsh Baja terrain. Unlike Off Road Racing here in the US, racers can choose multiple race lines that have been strategically plotted by the racers themselves in the weeks prior to the actual race, those of which are still left after Hurricane Paul of course.

The 2012 Baja 1000 is lined up to be one of the best that we have ever seen among the Trophy Truck and Class 1 category. With only 17 points in the overall championship standings separating three of the most feared racers in our sport (all with a top 10 starting position) it won’t take long before the battle is on. Rob MacCachren (currently sitting first in points) leads the Mexican national Juan Carlos Lopez (aka “PIN”) by a mere 6 points and the ever so unpredictable “Ballistic” BJ Baldwin by a very close 17 points. Although any Trophy Truck in the top 15 can win at any one given moment, MacCachren had luck on his side when it came time to draw for starting order and drew the third place position, not half bad for a field that will see 38 entries. Just a couple spots back in the 5th place starting position, BJ Baldwin will have to put some work in in order to catch MacCachren in any amount of reasonable time. Baldwin will have to make his way around the Dan McMillin who will be sharing driving duties with this father Mark McMillin and Co-Driver Chuck Hovey. Beyond McMillin, Baldwin has made the surprising decision to add fellow Monster Energy Off Road Team member Casey Currie to the line-up in hopes of capturing another SCORE Championship. Championship contender Juan Carlos Lopez has decided to stack the deck a bit for this race to ensure that he increases his chances of winning a championship and the 45th annual Baja 1000. Lopez has called NASCAR star Robby Gordon to Co-Drive for him in the Speed Energy Trophy Truck and chase a championship.

Although those are all great contenders for the SCORE overall championship, this is the Baja 1000 and to some, nothing else matters. Don’t count out; Andy McMillin, the team of Bryce Menzies and Jesse Jones, the team of Tim Herbst and Larry Roeseler, and Dessert Assassins commander in chief Cameron Steele who all start within the top 15. Also, keep an eye on the Terrible Herbst Motorsports Trophy Truck number 19 of Ryan Arciero and Troy Herbst. The Herbst crew has been putting in a ton of testing time on the number 19 and although they start in the 32nd position they still have a very good chance at winning the Baja 1000.

The open wheel unlimited Class 1 cars will also put on an exciting show for the thousands of fans of Mexico as Ronny Wilson, Luke McMillin and Justin Davis will all attempt to claw their way to the front as soon as possible. Wilson is the only one out of the three racers who has anything to loose at this years Baja 1000. Ronny Wilson currently sits second place in points and with a second place starting position his odds of getting to the front quickly have significantly increased. Luke McMillin as once again teamed up with Justin “Bean” Smith for the 45th running of the Baja 1000. McMillin and Smith have been nearly untouchable when they split driving duties and it definitely helps their chances at winning. Justin Davis has been called to take driving duties for Clyde Stacy in the Geiser built Speed Energy Truggy, 18-year-old Justin Davis is last years reigning champion in the Class 1 division and definitely knows how to put the pedal to the floor, consider him to be a contender for the win as well.

Without surprise, most teams are stacking the deck and pulling out all of the stops in order to make sure they do everything they can and leave no rock unturned in order to increase their chances of winning the 45th annual running of the Baja 1000. Time will soon tell if these teams made the right decisions and planned accordingly, regardless of outcome you can assure that Race-Dezert will be there to capture it all as it unfolds. Viva Baja! See you in Ensenada. 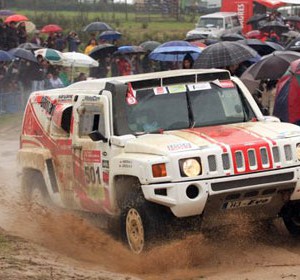 The Czech Miroslav Zapletal was the winner of the 26th edition of the Baja Portalegre 500 in a thrilling final. The driver...
Copyright 2011-2016 Rallyraid.net - RISE Network. All Right Reserved.
Back to top