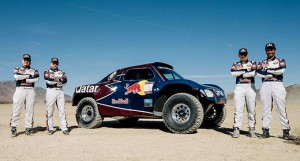 The Dakar Rally remains the toughest Rally Raid on earth and the greatest test of endurance that Motorsport has to offer. Joining the race for the first time in 2013 will be the Qatar Red Bull Rally Team, a completely new team that features some familiar faces.

While 2013 represents a Dakar debut for the Qatar Red Bull Rally Team, by recruiting a pair of former Dakar Rally champions to drive their two completely new and especially designed desert buggies they have shown they mean business.

2011 Dakar Rally champion Nasser Al-Attiyah and 2010 Dakar Rally champion Carlos Sainz will be the men behind the wheel for the Qatar Red Bull Rally Team in January 2013. The entirely new concept for the debut team came directly from an original idea from Nasser who has had input at every step of the project.

In the co-pilot seat alongside each driver will be an expert navigator who has also tasted victory at the Dakar Rally. Keeping Nasser company in the desert will be Lucas Cruz while Timo Gottschalk will be keeping his eyes on the road for Carlos. In an interesting twist to the Qatar Red Bull Rally Team story, Lucas tasted Dakar Rally triumph alongside Carlos while Timo secured victory with Nasser. Now the co-drivers have swapped seats ahead of the 2013 Dakar Rally.

The innovative concept behind the Qatar Red Bull Rally Team car is a combination of the rugged, hardwearing bodywork of a US Baja sport desert-racing car blended with cutting edge European precision engineering. Another crucial element of the design of the buggy has been the drivers’ own Dakar experience and input into the project. Nasser and Carlos have both had their say on how to build the best car for the upcoming desert challenge.
The vehicle Nasser and Carlos will drive at the desert classic has been subject to extensive testing on the world’s most challenging terrains, an essential part of pre-Dakar preparation.

Both Nasser and Carlos will need to be in perfect unison with their new machines if they are to successfully navigate the Dakar’s 8,000km course running through the deserts of Peru, Argentina and Chile.

The testing of the buggy has been exhaustive but only when the Dakar Rally gets underway on January 5th will we know for sure what result the Qatar Red Bull Rally Team will be capable of achieving on their debut Dakar.

Nasser Al-Attiyah: “I’m really happy to now be at the stage to officially launch our new Qatar Red Bull Rally Team. It’s a very exciting time for all of us as we now put our complete focus into getting our new buggy car ready for the 2013 Dakar Rally. I have been involved in the project from the very beginning and I have used my own experiences at the Dakar Rally to come up with something new and innovative for the upcoming race in South America.”

“We encouraged the team to bring fresh ideas to the table when we first started to discuss what type of car we were going to build. I truly believe we have come at it from a totally new angle and this makes me extremely proud of the final product we now have in front of us.”

“I’m under no illusion that coming to the Dakar with a completely new car is perhaps the toughest challenge I have ever faced at this race. The entire Qatar Red Bull Rally Team are going to have to carry on the hard work that has got us to this stage in these few weeks before the race and continue that effort during the actual Dakar. My ambition right now is just to reach the finish in this new car, if we make it that far then everyone involved can be proud of the job they have done.”

Carlos Sainz: “There’s nothing quite like preparing a completely new car for a Dakar Rally and my first impressions of this buggy is that it’s a very impressive machine. The whole team has great hopes that we can achieve a good performance at the 2013 Dakar Rally.”

“It’s still very early days to be saying how far up the leader board we can finish in this car but we are working everyday to make sure we get the set-up just right. There’s still so much hard work to do before we even reach the beginning of the first stage of the Dakar in Lima, Peru.”

“The thing that has convinced me about the potential of this buggy is how it behaves over the rough ground we have been testing it on. We still need to do more though because the Dakar is not raced over rough ground with a few bumps, it’s far more challenging than that. For the Dakar you need a car that is working fine on the dunes as well as on the road. The car needs to be agile and responsive. Actually, for a car to be successful at the Dakar it needs to have a little bit of everything.” 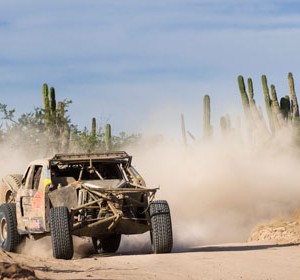