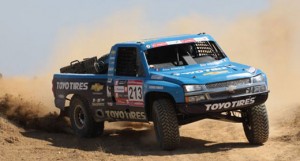 After the 2012 FIA World Cup victory in the 2 Wheel Drive (WD) category, the EVR (Eric Vigouroux Racing) Team has won all races in which it has participated. The team showed its huge potential last October in the Rally of Morocco, where they won the overall standings racing against the biggest professional teams.

After five years of development of the Chevrolet Trophy Truck, EVR has dominated the 2WD category for several seasons. Due to this fact, Eric and his team are convinced that they can play a great role in the Dakar 2013 that will take place in South America from January 5 to the 20.

The cheerful environment after the last victory influenced Eric on deciding to enter his team to the Dakar, even though their budget was not completed. “A few weeks before the start, the challenge may seem ambitious, even audacious. I think we have exceptional reasons to convince new partners to take part of the particular defy.

In fact, my team EVR is, without doubts, one of the best “outsiders” of the moment facing big factory teams, and we just proved this point in Morocco. Even if the competition will be at a very high level in the Dakar, we know that we can bring a surprise at any time and most important, we can target an excellent final result.

Today we look for dynamic and visionary sponsors that could have interest in our team. In fact, we have the best assets to offer a return on investment out of the common. Even more in the case of a success, as the Dakar attires more than one billion of people over the world!

Taking into account the short time left to finalize all preparations, Eric Vigouroux launches a call to all of his fans and partners. “We have already receive the confirmation of some sponsors, two important companies in the automobile sector. Now, we must double the effort to find what we need to complete our budget so we can do race in the best possible conditions. Thank you all letting us get known around you.”

No matter what happens, as all vehicles have been embarked in Havre, the EVR Trophy Truck will be at the starting podium of the Dakar in Lima next January 5. “It makes an impression to check out car made like if it was new one month after our victory in the Rally of Morocco!”

This will be Eric Vigouroux´s comeback to the Dakar after his last participation in 2009, when he drove a Hummer in Robby Gordon´s team. At that time, the American team finalized the race with their best results ever since their beginnings in 2005 by placing two cars among the first 15, and one on the standings! 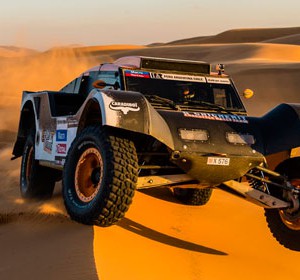 Following an accident during the rest day on the Dakar 2011, Guerlain Chicherit lost his place in the X-Raid team, then spent...
Copyright 2011-2016 Rallyraid.net - RISE Network. All Right Reserved.
Back to top