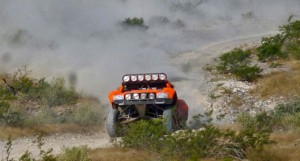 For the first time in his off-road career Robby Gordon watched the green flag wave on the 45 Tecate SCORE Baja 1000 from the sidelines, as fellow RPM Offroad co-driver Juan Carlos Lopez accelerated away from the starting line in the 12 position. This year’s legendary desert race saw Gordon co-driving with veteran Mexican off-road racer Juan Carlos Lopez in hopes a combined effort will capture the SCORE Trophy Truck point’s championship.

As the experienced Lopez set his sights on race marker 545, the place where Gordon would be taking over driving duties. Lopez wasted no time tracking down the trucks in front of him, quickly moving into 6 place in the trophy truck class by race marker 100, just 1 min 53 seconds behind the leader. The next 50 miles saw Lopez significantly increase the pace of the #18, moving into 2 position, just 13 seconds out of the lead.

As Lopez knew entering the San Felipe washes, the course would bring some of the roughest terrain in the race, and it proved to be real trouble as the SPEED Energy / Toyo Tires / MAPEI trophy truck developed a problem and came to a halt near race mile 250. After closely analyzing the problem, two shocks were found to be broken and were replaced by the RPM Offroad support team. After being just 13 minutes behind the leader before the stop, Lopez resumed moving 1 hr and 43 minutes behind in 21 place. The next 300 miles saw Lopez racing hard trying to slim the margin behind the leader, getting it to just 1 hour behind.

At race marker 545, it was Gordon’s turn to get behind the wheel, fully knowing the blown shocks had set the RPM Offroad team back a large amount of time. Gordon put the SPEED Energy / Toyo Tires / MAPEI trophy truck into overdrive for the remaining 570 miles, racing through the quiet and cold desert considerably cutting down the time of the leaders proving the truck and driver still had their sights on the finish line and the championship.

As Gordon raced past race marker 825, he continued to move forward racing past Rob MacCachren, putting Gordon in 12 position in class. With no more trucks to pass, Gordon eased his way towards the finish line in La Paz finishing in 12th position in the SCORE Trophy Truck Division and 14 overall, 3 hours and 11 minutes behind winner Gustavo Vildosola, of Mexicali, Mexico.

“We lost two rear shocks down the San Felipe beach run and it took a while to change them. Juan Carlos (Lopez) did a good job and the shocks blowing wasn’t his fault. The little check valves popped. I got in the truck at mile 545 and we didn’t have any problems, Toyo Tires we’re good as always. It was a pretty smooth run from there, but unfortunately you can’t give up that much time early,” stated Gordon shortly after crossing the finish line.

By virtue of finishing so far behind in a very competitive trophy truck class the 2012 SCORE Trophy Truck Championship was out of their hands. The SPEED Energy / Toyo Tires / MAPEI / RPM Offroad Trophy Truck driven by Gordon and Lopez finished second in the point standings, with the point leader going into the race, MacCachren ultimately fading to a third place in the points. 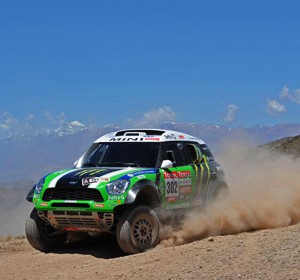 The 2013 Dakar heads south between January 5 and 20 with an innovative course stretching from Lima to Santiago. The release...
Copyright 2011-2016 Rallyraid.net - RISE Network. All Right Reserved.
Back to top