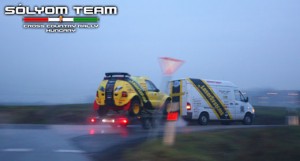 A lot of changes happened in the team’s life in the past days, while the modifications of HAWKIA were in the finish line. In the end everything worked out well, even if the sleeping statistics of the workshop doesn’t show the best values: they were able to spend an average of 2-3 hours a day with this activity.

Today early morning the racing car left for Greece ready for the fight. Members of Sólyom Team reach Athens on Friday morning, where the compulsory administrative checks and scrutineering will be held. The competitors will set off for the rally after the start ceremony around midday on Saturday. And by Sunday early afternoon it turns out that who was the fastest on the nearly 1000 kilometres.

Olivér Sólyom: “We’ve been a little worn out in the past four days. Unfortunately life itself directed what happened, not us. Some things stopped during the reconstruction, we had to face tremendous technical difficulties. I think the fact that we managed to get ready depended solely on the commitment and persistence of the team members. I hope for racing in good atmosphere and without problems.” 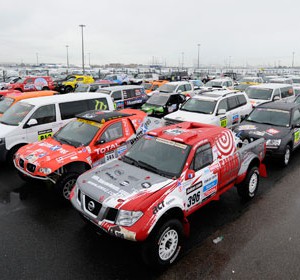 For over 30 years now, the competitors of the Dakar have known the port of Le Havre, where they used to come to pick up the vehicles...
Copyright 2011-2016 Rallyraid.net - RISE Network. All Right Reserved.
Back to top