A week before the end of inscriptions for the Sonangol Africa Eco Race, which is returning to Africa, René METGE stopped off in the departure town of Saint Cyprien, where he met the local media.

Additions to the program

After more than a month of traveling tracks in Morocco, Mauritania and Senegal to set up the road-book for the fifth edition, the Sonangol Africa Eco Race reconnaissance team including René METGE, the driver José Maria SERVIA, as well as navigators Manfred KROISS and Fina ROMAN, had finally returned to Europe. After landing in Barcelona, René METGE set out on the road to Paris but decided to take a detour via Saint Cyprien where he had arranged a meeting with Olivier OLIBEAU, the local sport director. Together they would hold a press release with the local media. This was the perfect occasion to present the proposed route for the race and to give details about what would be included in the 2013 edition:

René METGE : “I am very happy to come back to Saint Cyprien for the start of the 2013 Sonangol Africa Eco Race. We received a tremendous welcome with a big turn out and a huge effort from the local community. We’ll be made to feel completely at home again this year. Apart from the traditional descent to Spain into Almeria where we’ll board the boat bound for Nador, the 2013 journey will have many additions and notably a new leg in Morocco, where the participants will encounter different landscapes to that in Africa. On the whole, even though there will be some difficulties in the program, the Morocco stages will be less wearing than those of the preceding editions. As always, the navigators will be put to test and the racers will love the routes that we have selected for them. After five stages in Morocco, the rest day will be spent on the white sand dunes at Daklha next to the Atlantic Ocean and should allow the competitors to recover before attacking the second part of the race that will center around Mauritania. There, the journey should please those who love wide open plains. At a certain point, they will be at the heart of an ocean of dunes with nothing within 50 kilometers of them. It’s simply awe-inspiring. As usual, the winners will be decided at Lac Rose after 11 stages and over 5500km on African soil with 2000km of liaisons.”

A beautiful show for the day after Christmas at Saint Cyprien

René METGE took advantage whilst in the Languedoc Roussillon region of France to take part at another meeting in order to fine tune details for the start at Saint Cyprien. On the program; Wednesday 26th December will be devoted to the technical and administrative check of the organisation team. The competitors will have to wait for the next day, Thursday 27th December, and will be called upon at 7h00 in the morning. Technical and administrative check will take place at the harbor next to the Tourist Office and, as last year, entry will be free for the general public. Once equipped with security equipment that is verified and marked in the colours of the rally, the race vehicles will be placed in parc fermé on the parking lot of the port authority, opposite the casino. At 20h00, this will also be the official departure point of the Sonangol Africa Eco Race and it will be launched by Thierry DEL POSO, the mayor of Saint Cyprien; a great way to show the beauty of this event that is today the only opportunity for French rally fans to admire these fabulous vehicles. The last meeting held at Saint Cyprien will be the briefing for the first stage that will take place at The Capellan Stadium. From there, the participants will have 24 hours to get down to Almeria, in Southern Spain in order to catch the ferry. It’s a free transfer, which means that the competitors will not be obliged to drive their vehicles to Spain. The organisation has therefore provided lorry transport for motorcycles and a transporter for the cars as well as buses for the racers. After a day on the road and a night at sea, the caravan of the Sonangol Africa Eco Race will arrive in the harbour of Nador on the Mediterranean coast in the North East of Morocco on the morning of 29th December. Immediately, the competitors will be thrown into the first stage and will cover over 600 km that will show them what the race is all about. 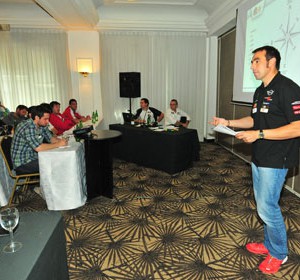 Pilots and co-pilots from Argentina, Chile and Peru took part in the South American session of the Dakar training camp together...
Copyright 2011-2016 Rallyraid.net - RISE Network. All Right Reserved.
Back to top