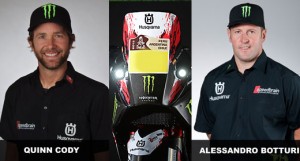 US professional Quinn Cody becomes a Speedbrain factory pilot, Italy´s Alessandro Botturi is completing the Dakar team. Australian Matt Fish has recently taken the third of four available spots on the Bavarian-Italian squad – besides the established duo of Joan Barreda and Paulo Goncalves. The announcement of Quinn Cody is now officially completing the line-up.

Cody is a four-time winner of the famous Baja 1000 and will be part of the Husqvarna Speedbrain team during the FIM Cross Country Rally World Championship 2013. The American has to follow the upcoming Dakar from the sidelines because of an injury, but will be fit when the world campaign kicks off later next year. He will be able to test the Husqvarna TE449RR by Speedbrain sufficiently before his maiden appearance.

Team principal Wolfgang Fischer: “We´re delighted to sign such a proven US-Champ. Quinn is fully committed to rally raids and rides at a very high level. He´s also bringing a lot of fans along. We´re anxiously waiting and we will start together as soon as he´s healed up.”

Alessandro Botturi is an offroad ace who the team has been able to add to its roster for the Dakar. The 37-year-old Italian finished the 2012 edition as best rookie, ending the race in eighth place overall. Botturi was second at the past Sardinia Rally and has won plenty in the Enduro World Championships and at the Six Days. He has taken nine national titles as well. The likeable rider from Lumezzane in northern Italy undoubtedly brings a lot of success to the table.

“The unexpected Speedbrain offer is a vote of confidence which I am grateful for. I will give my best during the Dakar on a bike that has triumphed at the Pharaons Rally and was a front-runner in Morocco. The Husqvarna TE449RR is definitely capable of winning the Dakar,” Alessandro said in a first statement.

Wolfgang Fischer: “It´s great Alessandro decided to come on board on such short notice. He was able to gather valuable rally experience in the past season and he is a fast, reliable rider.” 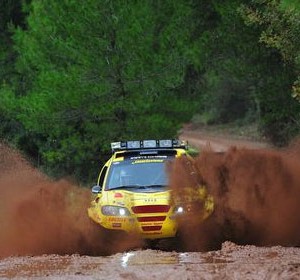 According to the previous plans, Sólyom Team closed the season in Greece, near Athens at 24 Hours Rally Raid Greece on 24-25th...
Copyright 2011-2016 Rallyraid.net - RISE Network. All Right Reserved.
Back to top