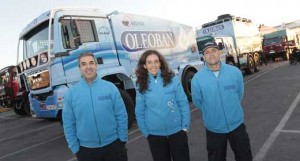 Today the race driver Elisabete Jacinto underwent the technical and bureaucratic checks for Sonangol Africa Eco Race 2013 in Almeria, Spain. The Team Oleoban /MAN Portugal was given the number 403, and tomorrow will enter the first stage of the competition, between the Moroccan towns of Nador and Boudnib.

The Portuguese team is hopeful and bets on the reliability and quality of the driving to reach the aim of finishing the race on the podium. In the two previous years Elisabete Jacinto was the winner of nine Africa Eco Race stages, which makes her the truck race driver with a record number of victories in specials.T4.
In the 2012 African marathon she was also the winner of a special in the general classification, therefore becoming one of the very few truck race drivers to attain such a feat in FIA world competitions.

The Portuguese race driver is confident for tomorrow’s stage: “it is enthusing to watch the arrival of the teams at the harbor, especially in the case of race trucks. Tomorrow we get on shore at dawn, and the night is going to be brief. The first stage is always the hardest for me. To be the fourth to start is not really bad since it enables a better management of the many overtakings usually done”, commented the race driver Elisabete Jacinto.

Tomorrow the Sonangol Africa Eco Race 2013 begins in Morocco, with a stage which will be characterized by navigation difficulties, present from the start. Winding ground, with many pebbles and stones, is bound to be another feature of this 245 kilometers special.

Leonid Novitskiy: "A success formula on "Dakar" - parity of forces, resources and opportunities!" 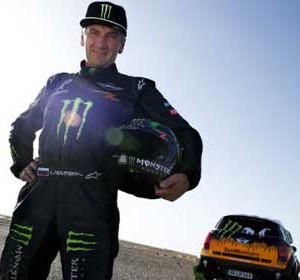 Leonid Novitskiy: "A success formula on "Dakar" - parity of forces, resources and opportunities!"

On the forthcoming rally marathon "Dakar-2013" the German-based team X-Raid will be presented with 7 cars including 6 MINI...
Copyright 2011-2016 Rallyraid.net - RISE Network. All Right Reserved.
Back to top