A series of Dakar presentation conferences were held in Lima, Santiago and Buenos Aires as pilots from the three host countries revved up their engines ahead of the rally. 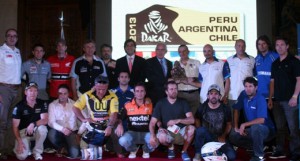 With less than a month to go before the start, Lima provided the backdrop for the first stop of this mini-tour of South America. Etienne Lavigne saw the inner fire burning in the Peruvian contingent, which is three times as big as last year’s. The entire delegation (26 vehicles) received the support of the director of the Dakar and, most importantly, the blessing of the authorities. Their team was officially named “Fuerza Inca” by those members of the government present, including Minister of the Environment Manuel Pulgar Vidal, Minister of Culture Luis Alberto Peirano, Minister of Tourism José Luis Silva and Minister of the Interior Wilfredo Pedraza.

The next day, the competitors and the Chilean media carried out a solemn warm-up exercise in front of the Palacio de la Moneda, which will be their ultimate goal in just a few weeks. Biker Francisco “Chaleco” López will fly the flag for Chile and is his country’s best bet to take the win home, which would make Sebastián Pinera happy to no end. The President of the Republic already had his picture taken “for the show” with the coveted trophy and all the pilots. Among them, Boris Garafulic is ready to hit the road with the same X-Raid Mini as Stéphane Peterhansel and the objective to get into the Top 10… at the very least.

Buenos Aires is not hosting the rally this time round, but the Argentinean capital is still the ideal place for a meet-and-greet between the media and the homeboys. As in other years, Minister of Tourism Enrique Meyer was there to admire the size of the Argentinean contingent, with no fewer than 53 pilots on the start list. Among them, 2010 champion Marcos Patronelli is the odds-on favourite to succeed his absent brother Alejandro as the winner of the quad category. In the car category, pundits will keep an eye on Lucio Alvarez following his fifth place finish in the last edition. 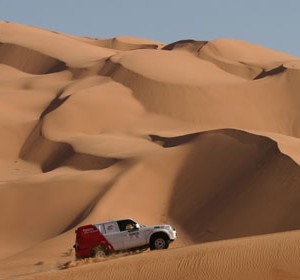 After four years of absence from  the heart of the rally raids, Cyril Neveu is now back in business proposing the TUNISIA...
Copyright 2011-2016 Rallyraid.net - RISE Network. All Right Reserved.
Back to top