Following Marc Coma’s withdrawal from the Dakar 2013, Cyril Despres’ chances of winning the title a fifth time have certainly improved… but the competition for the French rider could be even stronger. 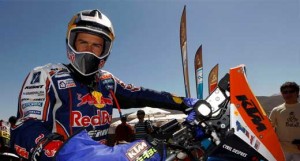 All the usual reference points around the bike event came crashing down at the same time as Marc Coma did in the 3rd stage of the Morocco Rally. Despite his best efforts and intensive use of the Coué Method, the Catalan rider has been unable to overcome his dislocated left shoulder injury. So the traditional duel between him and Cyril Despres will not take place in the Dakar 2013. The two KTM riders have not only shared the championship between them since 2005, (4-3, “advantage France”), they have also won 43 of the 90 special stages! The most logical – but also most simplistic – analysis leads one to think that Despres has an easy ride to get ahead and increase his list of triumphs by winning his fifth title in Santiago. Cyril does not share this point of view, being very aware of the hazards of the event, and he is not counting his chickens about the ‘clear road’ that has opened up before him: “Marc’s Dakar came to an end on a lump of camel grass, one of the thousands we come across. When people tell me I’m on my own now I can’t resist a little smile: we’re going to have to deal with loads of camel grass, stones, climbs and descents”, he says. Despres could also benefit from a star adviser in the bivouac: “Marc has told me he will be in Lima, and if he stays on for the rally it will certainly be advantageous in terms of strategy, preparation of the road-book, etc.”

Accustomed to mainly focusing his energies on his own performance, Despres also points out that “several riders will now fancy their chances of a podium finish”. Coma’s withdrawal could well have a liberating psychological effect on all the competitors who have previously finished behind them! Indeed, if the ‘rebellion’ of the other riders gains momentum there are several possible candidates for the title. Some who have already savoured a place on the podium have good reason to feel optimistic: Francisco ‘Chaleco’ Lopez, 3rd in 2010, has an opportunity to win in the Chilean capital, and he has always done best on his home territory (4 stage wins in Chile); David Frétigné, 3rd in 2009, returns to the Dakar with Yamaha and a strong ambition; the Portuguese rider Helder Rodrigues, who has just left Yamaha for Honda, was the first rider on the heels of Despres and Coma in 2011 and 2012, while David Casteu, present on the last podium in Dakar in 2007, is still in with a shout.

The Dakar 2013 could also mean a ‘generation handover’ in the class. People who seemed to be waiting for their moment to come might think it is now time to knock the top riders off their pedestals. In this respect, and despite Coma’s absence, the Catalan ‘clan’ is still well represented. His “water carrier” in recent years Juan Pedrero, will not be on his leader’s bike, handed over to the American all-terrain star Kurt Caselli, but he will still try to make the most of the gap left by coma. The unobtrusive Jordi Viladoms, 4th in 2012, might also come out of his shell and grasp a potential opportunity. Above all, Joan Barreda has done brilliantly in the last two years, and at 29 years of age should show the maturity to fulfil his excellent promise. He was also the closest rider behind Despres during the Morocco Rally. Fewer than seven minutes separated the two men at the finish, i.e. much less than anyone could lose due to an inner tube problem or fuel line problem or a small navigation mistake… or a lump of camel grass! In any event, Despres will also need to keep an eye on Verhoeven, Gonçalves, Przygonski and company. His experience will help him to maintain his concentration. 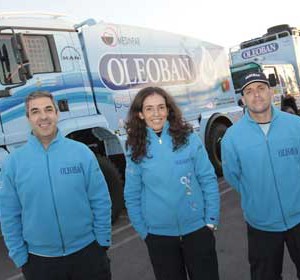