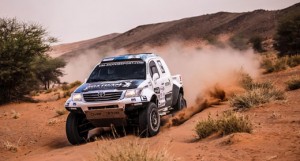 Overdrive Racing will field six Toyota Hiluxes in the world famous Dakar Rally, which starts in Lima on January 5th and finishes in Santiago de Chile on January 20th.

Argentinean driver Lucio Alvarez will be joined by Dutchman Peter van Merksteijn and the Polish duo of Szymon Ruta and former ski jumper Adam Malysz in the official Overdrive team. Australian Geoff Olholm and Venezuela’s Nunzio Coffaro will run a pair of customer cars run under the Cairns Coconut Resort and Team Azimut banners to complete the six-car Overdrive Toyota presence in the world’s most difficult off-road rally.

“I am very pleased with the evolution and development of the team, both in the number of members and the drivers we have,” enthused Overdrive team principal Jean-Marc Fortin. “We are strongly in the position of the second team on the Dakar in terms of entries and product. 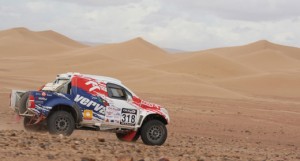 “I decided to stay on as team director instead of working as a co-driver to oversee the evolution of the team. I thank all the guys who have worked so hard over the last three months to finalise our preparations for the Dakar. Let’s all look forward to the race now!”

New regulations imposed by the Amaury Sports Organisation (ASO) this year may play into Toyota’s hands and both Toyota Imperial and Overdrive Racing are relishing the challenge of trying to win the Dakar for the first time.

Alvarez was in impressive form earlier this season and shadowed Qatar’s Nasser Saleh Al-Attiyah – a former Dakar winner – to the end of Qatar’s Sealine Cross-Country Rally to seal an Overdrive Toyota one-two finish. He also finished fourth overall with the Toyota in the punishing Silk Way Rally where he was leading for most of the event run across the Russian steppes.

Van Merksteijn made an impressive first appearance for Overdrive in the Italian Baja, but technical problems cost him the chance of a top finish on his pre-Dakar test rally in Morocco. However, after Morocco, the team completed a successful dune test in Dubai to get seat time and both he and co-driver Chevaillier gained valuable experience.

Malysz was one of the most successful ski jumpers in the history of the sport and joins the Overdrive team for the first time on the Dakar. A winner of four individual Olympic and World Championship medals, the 36-year-old – nicknamed the ‘Polish Eagle’ – will be taking part in his second Dakar with co-driver Marton, but his first with a Toyota.

Ruta continues his development year with his Orlen-backed Hilux after finishing fourth on his cross-country debut on the Polish Baja and then following it up with a respectable 12th position on his first marathon event in Morocco. He is looking forward to his biggest challenge yet.

Olholm drove his customer car in October’s six-day Rally of Morocco and finished an impressive eighth. Having cut his teeth on two previous Dakars and in the Australian championship, he is looking to take a step forward in his Hilux.

Coffaro took part in last year’s Dakar and entered the Australian Safari Rally this year with his Toyota. He and co-driver Meneses finished ninth overall and second in category. He is looking for another strong result after being the top privateer on last year’s Dakar.

De Villiers is the most experienced of all the Toyota drivers on the Dakar and formerly drove for the Nissan and Volkswagen works teams, the South African winning the Dakar with the German team in 2009. Toyota Imperial’s lead driver is also a four-time South African Touring Car and Off-road racing champion.

Vos was a rookie on last year’s Dakar – where he finished 10th – and is looking to a top result on this year’s event. Having recently won his fifth South African Off-Road Championship, he carries a lot of momentum into the race. After extensive dune testing in the Namibian deserts, he and co-driver Howie are raring to go.

The route for the 35th Peru-Argentina-Chile features the start and five special stages in Peru, a rest day and five stages in Argentina and four stages and the finish in Chile. In a total route of 8,574km, competitors in the car category will tackle 4,155km of competitive distance and liaison sections totalling 4,419km.

Action gets underway with a short timed stage between Lima and Pisco on Peru’s Pacific Coast and the route continues its run south through Peru to Nazca and Arequipa, before crossing the border into Chile and a special stage into Arica on January 9th.

From Arica, the Dakar crosses the high Atacama Desert to Calama and then runs south towards northern Argentina and new stopovers at Salta and San Miguel de Tucuman, where the official rest day will take place on January 13th.

Action resumes on January 14th with a special stage across Argentina to Cordoba and then the route heads back towards the Andes foothills and La Rioja.

The next day teams tackle the feared white dunes at Fiambala, before the route crosses the High Andes through the San Francisco Pass and moves on to Copiapo and through central Chile to the Pacific coastal town of La Serena and on to the finish in the Chilean capital of Santiago, where the ceremonial podium will be staged on January 20th. 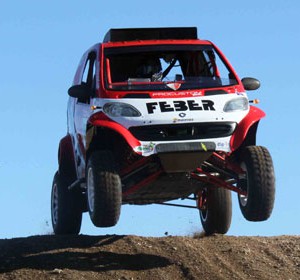 José Luis Álvarez probably knows he will be the butt of all jokes when he takes his Smart through the scrutineering in Lima....
Copyright 2011-2016 Rallyraid.net - RISE Network. All Right Reserved.
Back to top