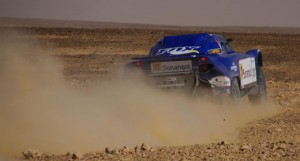 Only days away from the administrative and technical cheks at Saint Cyprien in the South of France and the departure for Nador in the North of Morocco, it’s time to take a look at the list of participants for the 5th edition of the Sonangol Africa Eco Race and to give an overview of the top competitors. With about one hundred vehicles in the competition, the Sonangol Africa Eco Race has seen an significant increase in the number of inscriptions, underlining the growing interest in this important African rally and the values it represents. But the most exceptional thing, rather than their number, is the quality of the vehicles taking part…

Quadruple winner of the race, Jean-Louis Schlesser (Buggy Schlesser Sonangol) will have his hands full this year. Starting with a horde of 4×4’s including three Toyota Hilux’s prepared by the Belgian team Overdrive; these V8 pick ups will be in the expert hands of Frenchman Jérôme Pélichet and Belgians Jacky Loomans and Joost Van Cauwenberge. Pélichet (2nd in 2010) and Loomans (2nd in 2012), possess the necessary equipment to compete against the famous blue buggy from Nice. Van Cauwenberge, accustomed to Dakar and Bajas, could do some serious damage on certain stages and is capable of being on the podium at Lac Rose on the 9th January. 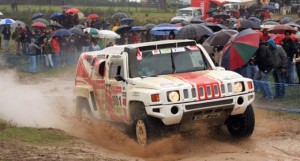 The biggest surprise of the 2013 Africa Eco Race could come from Czech driver Miroslav Zapletal with his H3 Hummer. Ferocious and performant, as is his compatriot Tomecek in the truck category, Zapletal already has a list of wins under his belt including taking the victory at the last race of the 2012 World Cup. He’s one to watch in Africa. Also keep an eye on “Mido” Abouyoussef in the buggy category. The consistent Egyptian has just bought himself a VW TDI, the same machine that Belgian Stéphane Henrard finished 2nd with in 2011. If he can link his performance up with his list of results, he’s capable of finishing at the top of the leader board.

We should also keep Hubert Auriol in mind. Having recently carried out tests in Morocco with his WO1 buggy that is at last reliable, “The African” is capable of taking the spoils in his class.
Last-minute guest and solitary driver Louis Burton, who was a victim of a DNF at the Vendée Globe recently, will certainly excel on the sands of Mauritania this time at the wheel of a Buggy.
The T3 category, reserved for SSV’s should equally be very animated with a fight to the top spot on the podium between the Polaris RZR 900 of Frenchman Thierry Morin (defending champion) and the fearsome Belgian Fabrice Della Barbera, recent winner of the Tuareg Rally and also the Czech Dusan Randysek driving an Arctic Cat. 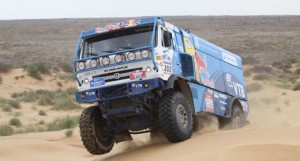 In the lorry category, the big news for the 2013 edition of the Sonangol Africa Eco Race lies in the engagement of the official Kamaz team. The Russian giant, a legend on the Dakar for over a decade, chose to return to Africa with an official truck confided to their big hope Anton Shibalov. A worthy opponent for the Czech Tomas Tomecek, winner at the last two editions with his “small” Tatra, who was fearsome in Mauritania. We should also watch out for Elisabete Jacinto (MAN), still looking for her first victory on the Sonangol Africa Eco Race at the end of a perfect season, with a third place in Morocco. But the Portuguese driver will be up against the power of Hungarian Miklos Kovacs, winner in 2010, who’s back in an impressively powerful Scania after taking a year out… For Belgian Noël Essers (MAN), a spot on the final podium will be what he’s expecting! 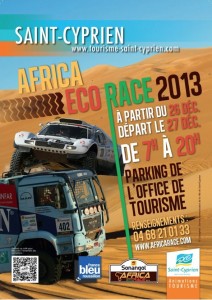 In bikes and quads class, the Sonangol Africa Eco Race takes a new important direction for this category. The adventure will be flying thick and fast along the 5,500 km that separate Saint-Cyprien from Dakar. An old faithful of the desert, Italian Paolo Ceci (KTM 450) seems better equipped to succeed against his compatriot Oscar Polli. But the Italian rider will nevertheless have to keep an eye on Frenchman Norbert Dubois (KTM 690) and his compatriot Stefano Turchi (KTM), both of whom are candidates for an excellent final finish.

We should also mention Belgian Martin Fontyn (KTM 530), winner of the Tuareg and Balkan rallies in 450 and over. The rider from Anvers is aiming for a place on the final podium in Dakar.
Known more for his exploits in supermoto, Austrian Klaus Kinigadner, brother of Heinz, will be acting as a guide to Tobias Moretti (who plays the commissioner in the series “Kommissar Rex”) and to his brother Gregor, two well known actors in Austria who will be on this African adventure together. They are stars in a film that will be released in Austria this coming February.
In the quad category, we find another charming participant in the form of Emma Clair-Dumont, the French FIM World champion of the Bajas TT and organizer of the Tunisian and Moroccan rallies.

All of these extraordinary racers have an appointment in Saint Cyprien, Thursday December 27th, next to the Mediterranean and at the foot of the Pyrenees mountains for the administrative and technical verifications of the Sonangol Africa Eco Race, which is composed of more than 200 vehicles and 500 people. An event that we strongly recommend that you don’t miss out on! 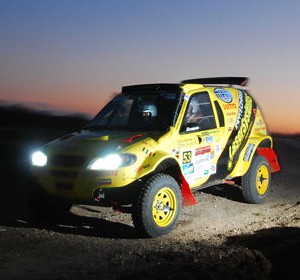 The 16th edition of Santa Claus Rally welcomed the teams and spectators with extremely windy and cold weather in Veszprém....
Copyright 2011-2016 Rallyraid.net - RISE Network. All Right Reserved.
Back to top