After four years of absence from  the heart of the rally raids, Cyril Neveu is now back in business proposing the TUNISIA EXPRESS from the 3rd to the 10th May 2013,  a cross-country Rally in Tunisia suitable for cars, motor-bikes, trucks, quads and SSVs.

A LONG HISTORY BETWEEN CYRIL NEVEU AND TUNISIA 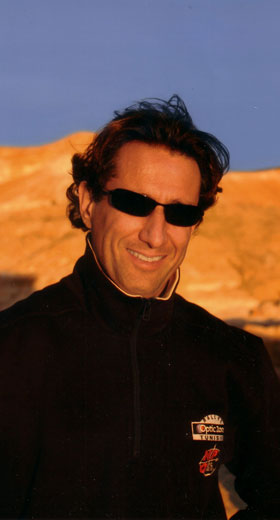 Cyril Neveu and Africa, in particular Tunisia, is above all a long history of 37 years. In fact, even if he has won five Dakar Rallies on a motor-bike and he has also added to his achievements the rallies of Atlas and of the Pharaons, whether on a two wheels or in a car, Cyril Neveu has travelled while racing through all the tracks of Tunisia but he has never won a competition in this country. This is perhaps the reason that pushed him to form NPO in 1987 together with his friend Jean-Christophe Pelletier in order to take over the organization of the Rally of Tunisia.

In 20 years, with Cyril Neveu at the controls, the Rally Optic 2000 Tunisia had reached a global dimension, counting up to 250 motor-bikes and 120 cars entered in the race, with some of the greatest teams and also with stars like Johnny Hallyday whom the two friends had been the first to launch in the discipline. A real success that had also allowed Cyril to take over the rally of the Atlas in year 2000 and to relaunch it under the name ORPI Morocco Rally. With these two competitions listed in the calendar of the World Cup FIA, of the FIM World Championship of cross-country rallies and with the support of many partners, the company NPO had the wind blowing its sails and was full of ideas and projects. Cyril Neveu did not have the heart to continue without his associate and friend, Jean-Christophe Pelletier, who died in year 2007. Cyril therefore decides to move on after he had sold NPO. But the great love for Africa and as well for the adventure rallies has never left the five-time winner of the Dakar. The idea of ​​a comeback has finally made its way, and with the cards in hands, very determined eyes, Cyril plunges into the idea of ​​a new rally look, the fruit of an incredible experience, a fertile imagination and the need to renew a privileged relationship with Tunisia.

TUNISIA EXPRESS: A CONCEPT OF KEY IN HAND 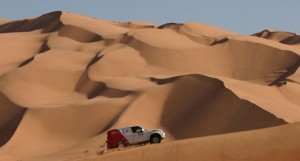 After four years of absence, Cyril Neveu is back in operation organising from the 3rd to 10th May 2013, TUNISIA EXPRESS, cross-country rally for cars, motor-bikes, quads, trucks and SSVs key in hand which takes place in the south of Tunisia which he knows so well.

TUNISIA EXPRESS resumes a concept invented by Cyril Neveu in year 2000, in order to revitalize the ORPI Morocco Rally. A practical and economical formula containing the transport of the vehicles from France and five days of competition  in the vicinity of a city and with an accommodation in a 4 stars hotel.

But the real novelty of TUNISIA EXPRESS is the opportunity for all competitors to share a vehicle: 2 pilots authorized on a motor-bike or a quad-bike and 4 drivers or co-drivers for cars or SSVs. The course will consist of daily loops of 130 to 350 kilometres, to be covered in one or more times with the refuelling and the change of driver. The regulations will be flexible and they do not include disqualification, even if some penalties can be applied. As always with Cyril Neveu, the quality of the course, the road-books and also the security will be the priority aided by a tracking system in order to monitor all the competitors. The whole event will be followed by wide media coverage since Cyril Neveu will bring with him a team of TV production who will shoot and edit daily coverage and diffuse them with channels partners.

All the participants will need to be at the race starting point on Friday 3rd May 2013.

The next day, Saturday, May 4, will be dedicated to the administrative and technical verifications.

The serious part starts on Sunday 5th May with an initial warming-up stage. As often with Cyril Neveu, the difficulties will increase throughout the five days of racing. The rally will end Thursday 9th May with a final stage which is often decisive in this type of express race.

After an evening giving out awards and one last African night full of beautiful images in the head, competitors will make their way back the day after Saturday 10th May 2013. 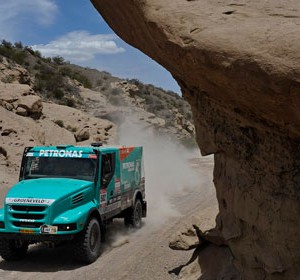 As the clear winner of Dakar 2012, Gerard De Rooy has embraced the challenge of confirming the domination of Iveco trucks....
Copyright 2011-2016 Rallyraid.net - RISE Network. All Right Reserved.
Back to top