Vladimir Chagin: “We treat with respect all our rivals” 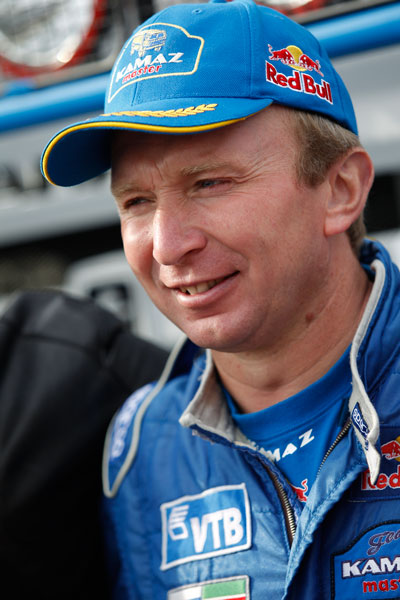 Today, the name of the legendary pilot of the KAMAZ-master team, – Vladimir Chagin, – is known to millions of people in different parts of the world. In 2011 he wins a title of the seven times winner of Dakar rally marathon. Five times of them Chagin was on the higher step of the podium with the «gold three» of the KAMAZ-master team, together with the head of the team, the copilot Semen Yakubov and the mechanic Sergey Savostin.

He has 63 victories at the special stages of Dakar under his belt – that’s an absolute record in the history of this most difficult race. V.Chagin is the outstanding pilot, possessing the driving technique of the sports vehicles not surpassed by anybody in the world. Besides, a great number of his original engineering decisions were realized in the racing trucks.

Now Chagin is the Team Manager of the Kamaz Master team and Rallyraid.net want to know a little bit more about this legendary team and the best way is to have an interview with Vladimir Chagin.

After 3 years (2009, 2010 and 2011) dominating the South American Dakar now the team is fighting with the Dutch Team De Rooy (winner of 2012) for the victory. Will this add more pressure than before or is exactly the same every year?

As I can remember we usually struggle for good resultson the Dakar, as from the very first years in Africa. We weren’t sure and we hadn’t calm confidence that we will get a prize, more than that the Dakar’s gold. All competitors in the truck category are always very strong, such as MAN, Iveco, Tatra, Ginaf and others. No one should be shrug off. We treat them all with great respect. In this regard the preparation for the Dakar-2013 is not much different from the preparation for the last rallies – we have traditionally worked with concentration and it was really well coordinated work. As for the results of last year – two KAMAZes were in the top five. It is not the first place, but this is sport, 4thand 5thplaces is a good result for our young crews. 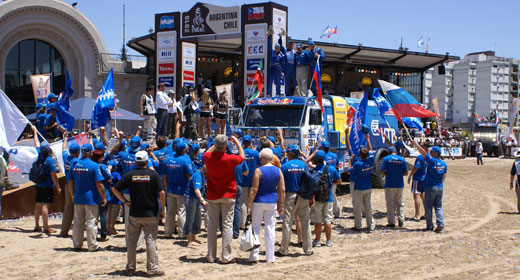 How many people are involved in the Dakar preparation?

About 50 people are involved in the Dakar preparation. 11 persons of them work in the office: engineers, administrative staff, press service who works with the media and marketing specialists. Other specialists are involved directly in the vehicles production.

Did you have representatives or people helping the logistic of them in foreign countries, especially in Peru, Chile and Argentina?

No, we haven’t any representatives. But usually there are the Russian embassy officials in any country who are always ready to help us in case of need.

How long it takes to build a KAMAZ ready to race?

If we start to make a vehicle from scratch, from the chassis–it takes approximately one year. We don’t use new trucks every year. After all rallies they are restyling, we overhaul the engine; check the main assembly units, suspension and transmission. This process takes about three months.
Which parts do you manufacture in your Workshop?

Allpartsaremanufacturedinourworkshoporintheworkshop of the factory KAMAZ.
Where did you test the trucks?

We have no special testing ground or area. There is a well-worn track in the woods near NaberezhnyeChelny with sandy areas along the river Kama. We make there usually the adjustment of the suspension, as well as check the performance of racing trucks’engines. 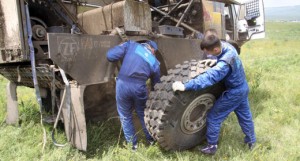 How is the mechanics training for the Dakar?

Besides the fact that they are usually busy at the workshop, they had to go in for sports and they have compulsoryclasses in the gym. The guys should have a good physical training and there should be no deviation on the part of health. Motorsport is a severe discipline, and the rally in the trucks category has his own specificity from the seriousbody burden during the rallyto every day repairs. All truck’s parts are very heavy, take the example of the wheels replacement in the field conditions!

And how is the drivers training?

All that I have said about mechanics training also concerns our pilots. All of them without exception are involved in the preparation of vehicles. They must go to the gym too. As for the piloting, these skills are practiced during different competitions. We participate in the Russian Rally-Raidchampionshipsduring the year, in the international rally-marathon Silk Way Rally,  in various kinds of tests, we have just returned from Morocco, for example.

How many cars and Trucks will be the fleet of Kamaz Master?

4 race trucks will participate in the Dakar 2013, besides that we have one client crew from Kazakhstan which will participate on our truck too. We have registered 5 vehicles in the category T4. In addition, we have 5 KAMAZes and 2 cars Toyota Land Cruiser in the Assistance category.

What are the race numbers of your crews?

According to the competitors list, our race numbers are:

How many tyres will use the racing trucks in the race?

Based on our experience, we have on reserve for about 10 tyres for each vehicle for the race. It depends on chance. It happens that you arrive at the bivouac without a single puncture after a rocky special stage. And sometimes we must change tyres several times a day.

How many spare parts will you carry to South America?

We will take only the parts which are essential to ensure the viability of the truck. A vehicle shouldn’t be left without movement.

How Many litres of diesel will the team use?

All preliminary calculations will be very provisional especially in respect that we have a lot of vehicles – 5 racing trucks, 5 Assistance vehicles, cars … It depends on the conditions of the race. Fuel consumption fully depends on the road conditions. For example in sands it increases sharply. On the average it is about 100 liters per 100 kilometers. Fuel tank of our race vehicles is calculated for 1000 liters of diesel.

Fresh from Dakar 2012 where he was ranking 2nd overall, Robby Gordon enters with a Hummer which, following preliminary checks,...
Copyright 2011-2016 Rallyraid.net - RISE Network. All Right Reserved.
Back to top