On completion of a superb battle with the title holder, Joan Barreda picked up his 4th stage victory on the 2013 edition, 1’15 ahead of Cyril Despres. In the general standings, the Frenchman took regained command ahead of his team-mate Ruben Faria, who finished the day in 8th place. In the car category, Argentinean Orlando Terranova won his 1st stage victory, while Stéphane Peterhansel, 3rd today, again increased his lead at the top of the general standings. 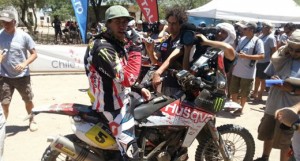 As the first to get to grips with the 357 km of the 10th stage, Cyril Despres opened the road all day along the special’s tracks, attacking throughout, but avoiding taking major risks on a terrain similar to the type encountered in endurance races, even though it was quick, technically demanding and especially physically tiring. Just behind him on the tracks, Joan Barreda again proved to be the only rider able to compete with the title holder’s pace. At the end of the day, after a major attack at the end of the special stage, the Spaniard was victorious, 1’15 ahead of Despres and 2’44 in front of his team-mate Paulo Gonçalves. The Portuguese rider, hero of the day having repaired the machine of his team-mate Botturi, after the Italian fell, confirmed the speed of the Husqvarna bikes as they put 3 machines in the day’s top 6.

However, in the general standings, KTM are dominant because the Austrian brand has taken advantage of Botturi’s misfortunes to occupy the first 4 places of the top 5! What’s more, the title holder, Cyril Despres, regained the lead of the general standings, 1’37 ahead of his water carrier Ruben Faria, 8th today, 8’15 behind the stage winner. Still ready to spring an ambush, Chaleco Lopez remains 3rd, 13’41 behind the Frenchman and 4’40 ahead of Slovakian Ivan Jakes. Lastly, Alessandro Botturi, the leading Husqvarna rider in the general standings, now occupies fifth place, 24’25 behind the rally leader and 9’54 in front of sixth placed Helder Rodrigues, the best placed Honda rider.

In the quad category, Lukasz Laskawiec grabbed a 2nd stage victory, 1’35” ahead of Ignacio Casale and 3’23 in front of Rafal Sonik, whilst Marcos Patronelli started to defend his lead in the general standings, making do with the day’s 6th best time, 6’16 behind the day’s winner. In fact, the 2010 winner still sits comfortably in the lead, 1:27’47 ahead of Casale and 2:05’51 in front of Sonik. 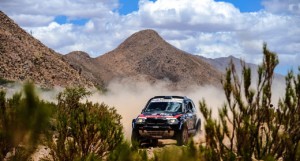 In the car race, the 353-km long stage of the day will stick in the memory of Argentinean supporters for a long time because one of their countrymen was the quickest between Cordoba and La Rioja… A first for an Argentinean in the history of the car category, achieved by Orlando Terranova. Starting out in 3rd position, the native driver took advantage of his perfect knowledge of the local tracks to win his first stage in 7 participations on the Dakar, 2’07” ahead of Nani Roma and 2’19” in front of Stéphane Peterhansel. Definitively rid of the threat posed by Nasser Al-Attiyah, forced to withdraw yesterday due to an engine cooling problem, the title holder can now control a comfortable lead in the general standings. In fact, 4 days away from the finish in Santiago, “Peter” now boasts a lead of 52’38” over his closest pursuer, South African Giniel De Villiers, and 1:08’40” over third place, his team-mate, Russian Leonid Novitskiy.

Finally, in the truck race, the day witnessed a surge from the Daf and Ginaf trucks, with Peter Van Den Bosh and Martin Van Der Brinke achieving the 2nd and 3rd best times of the day respectively, but the day was won by a Kamaz, driven by Andrey Karginov, who picked up the 3rd stage win of his career on the Dakar. Taking ideal advantage of the technical problems that beset Versluis, of a puncture suffered by Loprais and Gerard de Rooy starting way back in the pack, the Russian took hold of fourth place in the general standings, still led this evening by his team-mater Eduard Nikolaev, 32’23” ahead of Czech driver Martin Kolomy’s Tatra, which also suffered technical problems today. 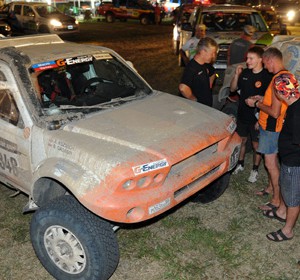 The Dakar caravan was very grateful for the half way rest halt… especially as Stage 9 was an incredible 593km long! The...
Copyright 2011-2016 Rallyraid.net - RISE Network. All Right Reserved.
Back to top