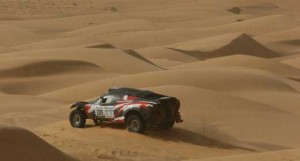 The 9th stage of the Sonangol Africa Eco Race was announced as monstrous. Fortunately, the sand supported the vehicles better than expected and most of the competitors got through this 442 km long Special. The fastest was the Egyptian “Mido” ABOUYOUSSEF who, driving his Tarek VOLKSWAGEN, won himself his first victory in the car class whilst Anton SHIBALOV imposed with his KAMAZ in the lorry category and Martin FONTYN won on two wheels.

After the demanding loop around Akjoujt yesterday, René METGE spoke plainly when he announced at the briefing that the 9th stage between Akjoujt and Tenadi would be even more difficult. And so the director of the Sonangol Africa Eco Race gave maximum information to the competitors and the organization would accompany the survivors of the 5th edition over the next to last day in Mauritania. In fact, everything went to plan except a few problems for some of the bike riders who struggled. Everyone got back to the magnificent camp planted in the heart of the dunes in Tenadi that evening. 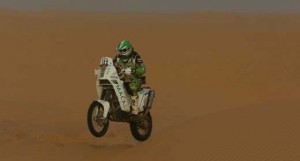 It’s at this point of a race that the word ‘hero’ starts to spring to mind… The bike riders in this all terrain rally were incredible. In fact, Martin FONTYN, the winner of the Special on two wheels, had to battle for more than 7 hours on his KTM 525 to cross the finish line. Again, the Belgian didn’t have a single problem and that relegated Guillaume MARTENS on his KTM 690 back 43’49”. On the eve of the ultimate stage, this impressive veteran reinforced his place as overall leader and he now has 1:01’54” of breathing space from the Dutchman, who was exhausted at the end of the Special: “This Special was really terrible. I’m so tired. I such bad arm pump at a certain point that I couldn’t even accelerate anymore. I lost a lot of time today but the race isn’t over and I still believe I can win.”

Still with the bikes, we should note an especially magnificent performance from Joseph PALACIOS that placed his KTM 450 on the 3rd step of the podium that day, also getting ahead of Patrick ARNOULT on his HONDA who has been practically irreproachable in the category since the beginning of the race.

At the finish of the Special that was installed around fifty kilometers from Nouakchott, the car and lorry competitors were all in agreement that they had just taken part in an exceptional stage, combating all of the difficulties that an African race has to offer. “A man’s Special stage” as Yves FROMONT commented, who finished 2nd copiloted by his son John driving his Tarek VOLKSWAGEN. A superb performance for this VW buggy constructed about ten years ago but still looks as fresh as ever. The proof, Abdelhamid ABOUYOUSSEF, “Mido” to his friends, won with his Tarek. It was a superb victory, as Stéphane HENRARD had achieved two years ago at Tenadi, with the same buggy on the same stage.
Having left in next to last position, the Egyptian who is also the organiser of the Rally of the Pharaohs, bypassed the difficulties to finally win with 9’56” of advance over the FROMONT family and 13’05” in front of Jean Louis SCHLESSER who was apparently satisfied about maintaining first place overall. So a very happy Mido commented on the first victory of his career in front of the Sonangol Africa Eco Race cameras: “I attacked this morning because I wanted to wipe away the insult of my failure in the 7th Special. I didn’t make any driving mistakes today and my copilot, Mahmoud NOURELDIN, was absolutely perfect. Before this rally, I’d never raced a two wheel drive buggy and I had to get used to it. Now I think that I understand how this wonderful vehicle works and I hope that this victory will be the first of many.”

Behind the three buggies, Joost VAN CAUWENBERG was the first 4×4 to cross the finish line. The TOYOTA Pick Up V8 driver said that he enjoys driving such a fabulous vehicle. The Belgian finished 18’32” behind and got ahead of the crew who have been the revelation of the 2013 Sonangol Africa Eco Race; Guillaume JORDA and Xavier LORMAND. The two friends from Saint Cyprien swap seats every day; it was Xavier who drove today and got back in a well deserved 6th place on scratch that allowed the RMA buggy to enter into the top 10.

In the truck category, the KAMAZ was again driven today by Anton SHIBALOV who clocked the 4th fastest time of the day whilst Tomas TOMECEK finished 7th in his TATRA about twenty minutes from the Russians and just 2 minutes in front of the MAN of Elisabete JACINTO.

In the provisional general classification, just two days from the finish, Jean Louis SCHLESSER is still on track for his 5th victory in five participations. In fact, the SCHLESSER SONANGOL buggy now has almost 3 hours of advance over the KAMAZ of Anton SHIBALOV and Dmitry SOTNIKOV whilst Tomas TOMECEK is lying 3rd nearly five and a half hours behind. On the other hand, the car podium is far from being decided as the Russian Anton GRIGOROV in his OSCAR is only two minutes in front of the FROMONT father and son team and also Joost VAN CAUWENBERG is only about twenty minutes off the pace.

Tomorrow, the last Special in Mauritania will also be the ultimate timed sector of the 5th edition of the Sonangol Africa Eco Race. Even though the stage consists of 648 km between Tenadi and Koba, the Special will be comparatively short as the survivors of the rally will only have 196 km to navigate. This doesn’t mean that the test is over because it’s often the last day when the overall positions change… 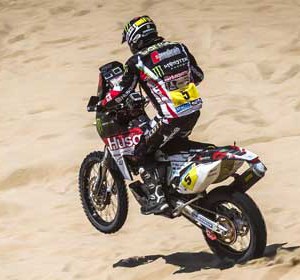 The Husqvarna team captain won his second special stage this year and regained his place among the pretenders for the title....
Copyright 2011-2016 Rallyraid.net - RISE Network. All Right Reserved.
Back to top