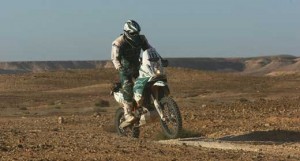 On the eve of the rest day, the Sonangol Africa Eco Race caravan had a long liaison to carry out to get back to Dakhla, in the far South of Morocco. This was coupled with an easy Special on flat land that was rather complicated in terms of navigation. A 5th stage that Jérôme PELICHET enjoyed in the car category as did Martin RABENLEHNER in the bike class.

The arrival at the end of the day at the camp installed in Dakhla by the lagoon, where the water sparkled, will remain engraved in the memories of the participants of the 5th edition of the Sonangol Africa Eco Race. Before that, the competitors had been confronted by a Special of 352 km of which half of the route had never been raced before.

A timed sector in the pure tradition of René METGE, that was varied and required a lot of navigation. A parameter that didn’t worry the car class but did cause some concern for some of the bikes.
The first to pay was Guillaume MARTENS, the leader of general classification, who lost 34 minutes whilst Norbert DUBOIS equally made several wrong turns and lost over 26 minutes. Therefore, we found some new blood at the top of the leader board on this Special with the first victory for Austrian Martin RABENLEHNER on his KTM in front of his compatriot Klaus PELZMANN on a YAMAHA, 2’02 behind and Patrick ARNOULT 11’18 behind but staying consistent on his HONDA. By finishing in 4th place, Belgian Martin FONTYN was 13’18 behind and found himself leading the rally on a KTM 525. The Austrian actors in Team KTM KINI continue their apprenticeship of the desert whilst constantly progressing; Gregor BLOEB finished in 10th place on this Special and Tobias MORETTI in 13th, all filmed by the impressive Austrian film crew composed of around fifteen people. 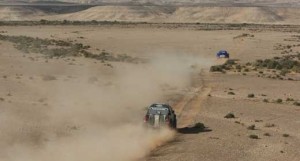 «When arriving at the end of the Special near Boujdour, a mining town in the South of Morocco, Jérôme PELICHET said… “Once again, everything went perfectly to plan today and I’m obviously very satisfied to win the stage. I’m especially confident for the rest of the rally because I’ll be leaving Morocco only 10 minutes behind Jean Louis SCHLESSER. Knowing that a 4×4, in particular my TOYOTA, is much more performant in the sand than in the gravel, I’m anxious to get my wheels onto Mauritanian sand.”
The analysis of the French driver is spot on as Jean Louis SCHLESSER’s Sonangol buggy finished 1’13” behind and is the leader of the provisional general classification. It’s very performant on all terrains but the second week of the Sonangol Africa Eco Race remains more open than ever. SCHLESSER, quadruple winner of the race is conscious of the pitfalls:
“It was a very difficult stage for navigation with enormous changes of direction and tracks in all directions. I want to congratulate my copilot Cyril ESQUIROL who didn’t make one mistake today. It was very important not to lose any time against Jérôme PELICHET who’s not giving anything away and I expect to suffer in Mauritania.”

Behind, an extraordinary battle is on for the 3rd spot on the podium. In fact, on the evening approaching the crossing into Mauritania, lying in 3rd place on the 5th Moroccan stage we found the Russian Anton GRIGOROV driving an OSCAR and only 8’54 behind the leader. The HUMMER of Miroslav ZAPLETAL was in 5th position 16’26 behind and Joost VAN CAUWENBERGE finished in 7th place with his TOYOTA, who suffered two punctures yesterday. Add to this list the NISSAN of Portuguese Paulo FERREIRA and you have four car crews that are climbing up the rankings with less than an hour separating them from the leader. Anything can happen! We should also mention the extraordinary performance of Vincent THIJS copiloted by Ruth BRANDS and driving a former factory MITSUBISHI Pajero, the same car that won the Dakar with Jean Pierre FONTENAY. The Belgian driver took 4th place on the day on scratch.

The mixed crews were obviously on form for the last Moroccan stage with Thierry and Sophie BUNEL equally putting in a brilliant performance with their RMA buggy finishing in 9th position, just in front of the TAREK of “Mido” ABOUYOUSSEF.

At last, after two days repairing his buggy in the Moroccan desert, “The African” made his come back. Hubert AURIOL clocked the 14th fastest time of the Special, just in front of navigator Louis BURTON who is discovering the desert and the rally raid with giant steps.
In the T3 category reserved for the SSVs, Rémy CHAPOT the lone driver at the top of the class clocked the 27th fastest time. The Frenchman gained 5 places overall and advanced his lead over his opponents. 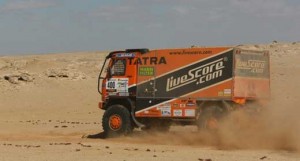 In the truck class, the KAMAZ was again driven by Dmitri SOTNIKOV yesterday who had an uneventful day. The Russian won the 5th time of the day and imposed in front of the MAN of Elisabete JACINTO by only 30 seconds. The defending champion Tomas TOMECEK who has won the rally twice, only lost two minutes and is impatient to be in Mauritania where his TATRA will be a lot more comfortable.

The rest day will be much appreciated by a good number of participants. The Atlantic Ocean air and the sun in Dakhla will revitalize the teams of competitors and allow the mechanics to completely check over the vehicles before a fascinating week in Mauritania. 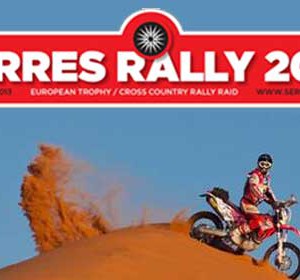 The Serres Rally is proud to announce that it will be part of " Rally Pro Series 2013"! After the X Rally Marrakech from...
Copyright 2011-2016 Rallyraid.net - RISE Network. All Right Reserved.
Back to top