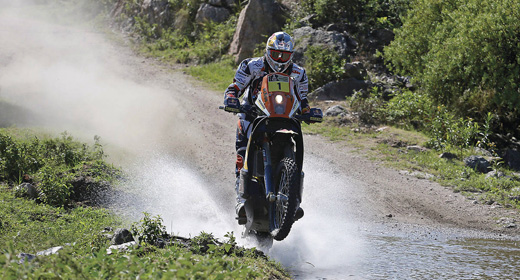 Frenchman Cyril Despres produced a stunning performance to take his first stage win in the 2013 Dakar and, most importantly, climb to second overall, 5′23″ down, as the defending champion benefitted from his main rivals’ bad day at the office. In the car category, today was M-Day, with Mini’s Nani Roma taking his second win in 2013 and Stéphane Peterhansel opening up a gulf between him and his rivals thanks to Al-Attiyah’s misadventures. Finally, the stage saw Eduard Nikolaev take control of the truck category after Gerard de Rooy’s dreadful day.

He’d been waiting for a great day ever since the race started in Lima. And today was it! After starting in 11th place this morning, 24′26″ behind the overall leader, Cyril Despres (Red Bull KTM) delivered a virtuoso performance throughout the ninth stage, one which was raced on fast trails which put tyres and brakes to the test. The Frenchman went on the attack at the beginning, dosed his effort to preserve his tyres and then stepped it up again in the finale, grabbing his 31st career win in the Dakar by 4′03″ over his closest rival, Joan Barreda. Despite an early fall, Husqvarna’s Spaniard was the only rider who came close to challenging the Frenchman and finished second, 1′11″ ahead of teammate Botturi.

He wasn’t the only one to fall, as the Yamahas can tell you! The overall leader in Tucumán, David Casteu, crashed into a cow when tackling a turn 120 km into the special! This left the rider from Nice with a dislocated right shoulder and a damaged motorcycle, a situation which became a full-blown nightmare when a mechanical 15 km from the finish line cost him several hours. Casteu made it to the end of the special on foot, but this is the end of the road for him! Olivier Pain’s performance won’t fill the brand with the tuning forks with glee either! The second-in-command of the Bleus also hit the deck several times, losing about 32′ and slipping to sixth overall. The least unlucky of them all was Chaleco López, who also fell but “only” lost 16 minutes to Despres.

This crazy stage turned the overall on its head, with Cyril Despres’ water carrier, Portuguese Ruben Faria, taking the lead 5′23″ ahead of his leader! Things just got much easier for the defending champion! Behind them, Chile’s Chaleco López is still in third place, 9′06″ down, after a successful damage limitation exercise.

The stage was less eventful in the quad category, where Marcos Patronelli managed his lead and finished 1′05″ down on stage winner Łukasz Łaskawiec, who grabbed his second career win at the Dakar while Patronelli extended his overall lead to 1 h 32′ over Casale and 2 h 08′ over Sonik. 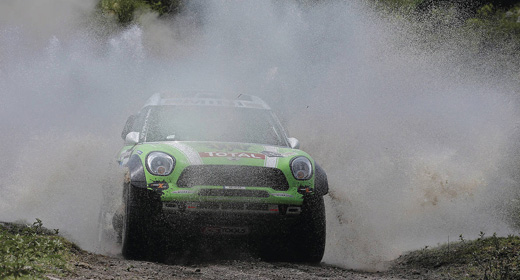 As for the cars, Giniel de Villiers posted the best time in the first part of the special and for most of the stage seemed poised to take Toyota’s 1st stage win in 2013, but it was not to be, as the strain inflicted by today’s course on the car took its tool and forced him to slow down towards the end. The South African ended up 9′39″ off the pace of today’s winner Nani Roma. The Catalan at the wheel of the Mini was once again lethal on this fast terrain, taking his 13th career win by 4′11″ over Stéphane Peterhansel and 6′54″ over local lad Orlando Terranova.

Nonetheless, today’s highlight was Nasser Al-Attiyah’s (Qatar Red Bull) technical problems. He had to stop several times throughout the special after a driving mistake brought him a little too close to a tree, according to competitors who drove past him. The Qatari saw his last hopes of winning the rally go up in smoke, as the ever-consistent “Peter” extended his lead to 49′31″ on De Villiers and 56′03″ on teammate Leonid Novitskiy. 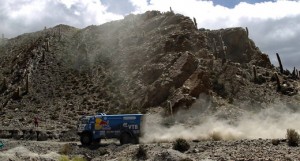 De Rooy struggles as Nikolaev storms to the lead! Trucks had their very own special for once, but overall leader Gerard de Rooy was unable to exploit the free road in front of him in the 293-kilometre ninth stage due to a series of mechanical problems: first his turbo broke down after a few kilometres, then his steering failed and then he had a flat! In the end, the overall leader in Tucumán lost over 1 h 25′ to Aleš Loprais, who claimed his fifth career win (his first one this year) and beat Peter Versluis’ MAN by a mere seven seconds. But today’s big winner was without a shadow of a doubt the leader of Team Kamaz, Eduard Nikolaev, who finished sixth at 3′34″ and benefitted from the Dutch disaster to take the reins of the general classification, 17′56″ ahead of Czech Martin Kolomý’s Tatra and 33′32″ ahead of teammate Andrey Karginov. Gerard De Rooy now sits fourth, 59′56″ behind the Russian leader. 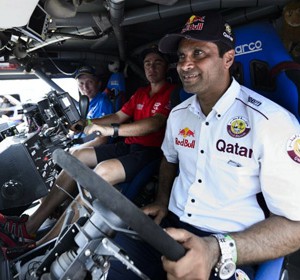 Nasser Al-Attiyah was the star of the show at the 2013 Dakar Rest Day in Tucuman as the Qatari driver spent the day posing...
Copyright 2011-2016 Rallyraid.net - RISE Network. All Right Reserved.
Back to top