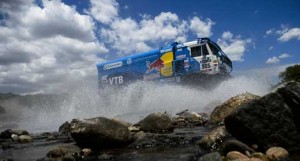 The weather conditions become unbearable for the tenth day of Dakar. Thermometer mounted on Nikolay Strakhov’s KAMAZ, shows 42 degree of heat. There is almost no wind. The high sun. The faces of people are flushed, it is impossible even to think straight. We want to leave this place as soon as possible, cross the Andes close to the cold Antarctic Peruvian current that cools the climate on the other side of the mountains. Weariness of the rally competitors is aggravated by heat. People are exhausted. The mechanics are awake for several nights in a row; they are trying to find some cool to stand without movement. But it’s not about the “KAMAZ-master”: mechanics, which left in advance for the bivouac in La Rioja, at noonday heat began to replace two reduction gears on Farid Badretdinov’ Assistance car. The towing of Anatoly Tanin’s car at the stage Arequipa-Arica left its mark on his car.

From the short description and infographics of today’s stage Cordoba – La Rioja, it was clear that the race on rocky surfaces with altitude differences is waiting for the crews. And the fact that the organizers have made separate special stages for bikes and cars, and that trucks started after jeeps, testified that organizers are trying their best to avoid the fact that the rally in local narrow mountain roads again will turn into a “tram” race when to overtake dust-forming car will be difficult and dangerous. A good half of the stage the pace is set by pilot and, by the way, by the new owner of the VekaMAN team silver medalist of the “Silk Way Rally” Peter Versluis. At the 215 kilometer he had to stop. He lost about 10 minutes, the probable cause – the wheel changing. At the 273 kilometer Ales Loprais stopped to change a wheel. 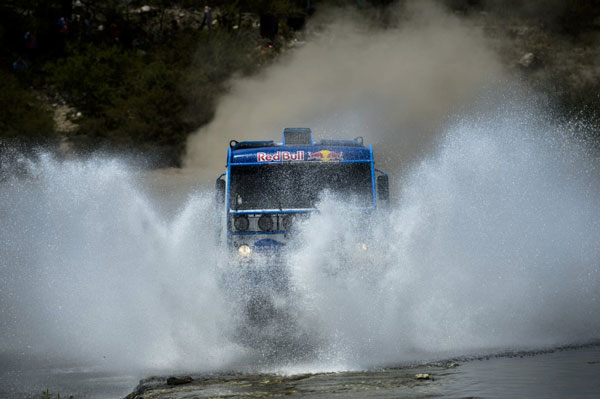 The day was successful for “KAMAZ-Master Red Bull ” crews. Andrey Karginov won today’s stage with more than 3 minutes from nearest rival. This is the third victory at Dakar stages in his career. Eduard Nikolaev increased, following the results of day, a lead over his nearest pursuer in the general classification Martin Kolomy to 32 minutes 23 seconds. Ayrat Mardeev who has shown today the sixth result, approached to Kolomy and now following the results of 10 stages he is behind him for only 1 minute 47 seconds, and yesterday he lagged for 16 minutes. Dutchman Gerard De Rooy conceded today to Andrey Karginov and Eduard Nikolaev and Ayrat Mardeev. After the finish of the special stage the rally competitors will have a long section to the camp of Dakar, and journalists according to the decision of organizers will be sent today by bus to Fiambala.

Today pilots of “KAMAZ-master” team presented to the Russian fans another good day, but there are difficult sandy stages ahead where anything can happen. Neither Ales Loprais nor Gerard De Rooy, no other main rivals of Russians don’t lose hope to be on the podium in Santiago. 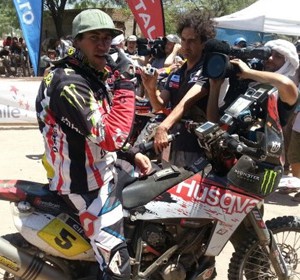 On completion of a superb battle with the title holder, Joan Barreda picked up his 4th stage victory on the 2013 edition,...
Copyright 2011-2016 Rallyraid.net - RISE Network. All Right Reserved.
Back to top