Another big day in Mauritania 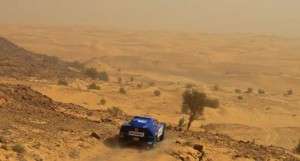 The 8th stage of the Sonangol Africa Eco Race was described as the most beautiful of the rally by race director René METGE. He described the landscape in terms of difficulties and the sandy wind that blew all day long complicated the challenge for the competitors. Jean Louis SCHLESSER again crossed all the obstacles to win in the car/truck category whilst Guillaume MARTENS won a splendid victory in the bike class.

Some may have thought that the 320 km of Special, a loop around Akjoujt, would be a formality. If this was the case, they were gravely mistaken because to carry out this distance, it took Jean Louis SCHLESSER 5:28’36” and Guillaume MARTENS came back to camp on two wheels after 7:35’46”.
This Mauritanian stage in the heart of such breathtaking landscape didn’t give our competitors any rest. Also, the sand on the range of dunes was very soft and navigation was extremely difficult because of the sandy wind blowing constantly in the North of Mauritania.

When he finally climbed out of his SONANGOL buggy, Jean Louis SCHLESSER was particularly marked by his efforts, but ‘the boss’ had to smile having just completed another perfect race during which he was even able to guide the bikes: “As we came out of the first range of dunes, just before the CP1, all of the bikes were grouped together. In fact, they were looking for the pass because René had told us that there was only one possible exit. I went ahead and they all followed me. It was rather bizarre and this episode was filmed by the cameramen of the rally. Then, we were wide open the whole time. It was a very, very difficult but magnificent Special that will definitely leave unbelievable memories behind for those who completed it.”

Jean Louis SCHLESSER didn’t go into too much detail but when we spoke to Patrick MARTIN and Yves FROMONT, respectively 2nd and 4th on this Special in the car class both driving a Tarek VOLKSWAGEN, we realised that what happened on the 8th stage was exceptional.
A special mention goes to Joost VAN CAUWENBERGE, who clocked the 3rd time of the day in his TOYOTA Pick Up V8, having left a long way behind this morning. Finally, Guillaume JORDA and Xavier LORMAND, continue to fly the colors of Saint Cyprien having classified in 5th place on this momentous Special and got into the top 10 of provisional general classification. On the other hand, some lost a lot of time on this loop such as Jérôme PELICHET, who went out of the Special at CP1 and returned to camp by road. Also, Miroslav ZAPLETAL’s HUMMER engine blew up and he won’t be continuing the rally tomorrow.

Overall, Jean Louis SCHLESSER is alone at the top and we need to look down to 4th place in order to find his closest rival in the car class, Russian Anton GRIGOROV in his OSCAR who is 5:06’57” from the leader and is in front of the VW Tarek of Yves FROMONT, for the moment on the podium. 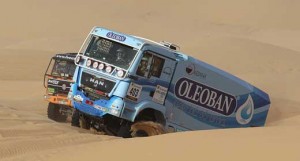 The big players in the 2013 Sonangol Africa Eco Race are unquestionably the trucks who have made unbelievable progress. In fact, once again today, the battle raged between these monsters of the desert and it was finally Elisabete JACINTO who was victorious with 22’59” of advance over the TATRA of Tomas TOMECEK, whilst Dmitri SOTNIKOV in the KAMAZ classified in 3rd 11 seconds behind him and the Czech Miklos KOVACS in his SCANIA was 2 minutes further back. Overall, the KAMAZ is in 2nd position on scratch in the car/lorry class with a little more than 2 hours of advance over the TATRA whilst the MAN, 3rd in the lorry class, is 8th on scratch and more than 3 and a half hours behind the leader.

The day was equally as hard on two wheels as four in the bike class and they still hadn’t returned to camp by nightfall. Amongst them, Norbert DUBOIS was unquestionably the biggest loser of the day. In the lead at CP1, the Frenchman then got lost and finally ran out of fuel 30 km from CP2. A hard blow for the Parisian who, as a result, will not be able to win the Sonangol Africa Eco Race again this year. The victory will probably now be fought out between the two leaders, Belgian Martin FONTYN and Dutchman Guillaume MARTENS who won the stage 11’52” in front. As usual, Patrick ARNOULT showed good consistency by finishing in 3rd, 22’29” behind and equally takes 3rd position overall by a little more than an hour. It’s all still to play for.

If the 8th stage was difficult then the 9th between Akjoujt and Tenadi will be even harder. René METGE described it as the most difficult on the 5th edition of the Sonangol Africa Eco Race. On the program for Monday January 7th, there’ll be 441 km of dunes, plateaus, camel grass, crossings and off piste all with complicated navigation. Enough to mix up the leader board of the different classifications… 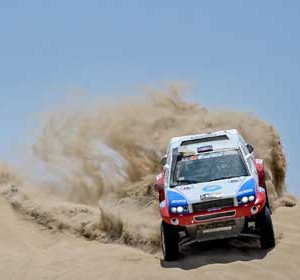 The Dakar prides itself on being the toughest motorsport event in the world and the very first real stage caught out many...
Copyright 2011-2016 Rallyraid.net - RISE Network. All Right Reserved.
Back to top