Ayrat Mardeev wins for the first time the stage of “Dakar” 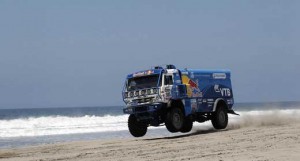 Bivouac in Arequipa can be called successful for “KAMAZ-Master Red Bull” team. Last year on the way to this city, which is considered as a capital of southern Peru, Andrey Karginov won his first stage on Dakar. And so the history repeats itself – today Ayrat Mardeev achieved the same result. The local absolutely wild and lifeless place with Martian landscape for the second time brings good luck to young KAMAZ pilots. Truth, that the harder race conditions, the better for the KAMAZ-master to get here another proof. In the stage program there were difficult dunes and rocky surfaces. There were also during the SS good elevation changes. 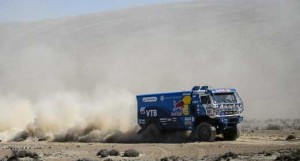 From the beginning of a 288-kilometer special stage Eduard Nikolaev set the pace of trucks category. Today it was such Nikolaev, that many fans of the young pilot got used to see him – fast, aggressive, moderately risk-laden. But the important thing is that the other pilots of “KAMAZ-master” were on the same speeds. Ayrat Mardeev and Andrey Karginov’s lag from leading crew on the points was only 2-3 minutes on this stage. Such pressure is always getting nervous rivals. But unfortunately there was a forced wheel change at 148 kilometer and about 17 minutes were lost! Eduard could win back 5 minutes from this loss, but it was not enough to lead following the results of four stages the top leaders of trucks category. But he was so close to it!

Gerard De Rooy on Iveco had technical problems today and twice changed the wheel, then got stuck in dunes – and because of all these problems, lost about half an hour losing his comfortable lead from rivals gained in the previous three stages of the race. Ayrat Mardeev says that Gerard at one point jumped on him almost head-on – it is a clear sign that the Dutch crew was driving in circles.

It was unsuccessful day for Kazakhstani Artur Ardavichus, today he is 25th, and his lag from the leader of the stage is 1 hour 51 minutes 23 seconds. Ilgizar Mardeev, who was driving after Kazakhs said that he saw the Ardavichus’ crew stood with pack-back cab, but the pilot waved to him – like he was saying: you can pass, we will do everything ourselves. I. Mardeev also had to stop: on the narrow mountain area he cut at once two wheels.

“On the road, we saw the Miki Biasion car, it was lying on its side, and they were trying to put it on wheels”, I. Mardeev told. By all appearances, Biasion’s problems were not over; in any case, by the time of this release writing, the result of the Italian was not yet in the finish list.

So, after the stage Nazca-Arequipa there are great changes in the general classification of trucks category. Gerard De Rooy, who was on the top line of the standings, he was today removed from this position by Ales Loprais. He rides well, without breakdowns and this tactic is justified. The difference between the Czech and Dutch is very small – just 56 seconds. The third and fourth lines are at Eduard Nikolaev (+00:07:08) and Ayrat Mardeev (+00:18:00), respectively. The gap from leaders is reduced and it is the most important achievement of the day. And, it seems, that the term “Blue armada” returns to the vocabulary of the media working at the Dakar Rally.

Vladimir Chagin is very happy for his team: “I am very pleased with the today’s results. I think that guys calmed down a little and made our fans happy. Young pilots felt that they can compete on an equal basis with their rivals. We should continue to show the same firm and fast driving. “

The Dakar is a brutal event and the odds for finishing, never mind winning, are stacked against even the best drivers. Today...
Copyright 2011-2016 Rallyraid.net - RISE Network. All Right Reserved.
Back to top