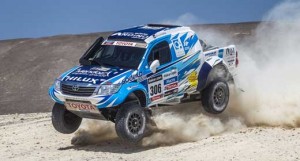 Nazca – Arequipa was announced as a very difficult stage with many dunes and complicated navigation. But it was neither of those two things that stopped Lucio today, but a rock in the skirts of a dune, at kilometer 20.

The result: a broken front triangle. The Argentinean team didn´t have any other choice than to wait for the T4, Overdrive´s race truck. The Toyota was repair, and Lucio and Ronnie continued the stage, but 3h32 behind Al Attiyah, the stage winner.

At the time this press release was submitted, Lucio Alvarez and Ronnie Graue have not arrived to the bivouac in Arequipa. The small road that should take them to the bivouac is covered by a crowd and a traffic jam.

Tomorrow, the two friends will take the start in the 22nd, 23rd position due to their “elite” status. 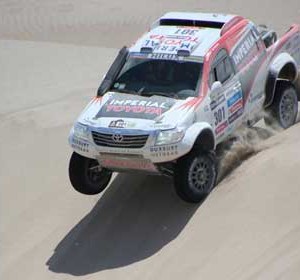