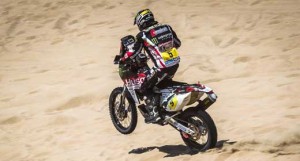 The Husqvarna team captain won his second special stage this year and regained his place among the pretenders for the title. Olivier Pain, new race leader, is gradually cementing his place in this category also. Nasser Al Attiyah won a special in which many of his rivals lost out: the hopes of a podium finish were shattered for Robby Gordon, Carlos Sainz and Lucio Alvarez…

If more proof was needed of Joan Barreda’s competitiveness at the highest level, then he definitely gave a good example today. After a long day spoiled by a damaged wheel and a 44th place finish, the Catalan showed that he was ready to get stuck into a breath-taking climb back up the general standings. His status as an elite rider enabled him to begin in 24th position on the starting line in Nazca. He then went on to gobble up a special stage that was described as very tricky, overtaking 15 riders in the process, to pick up the best time for the third time in his career. His finishing time, 8’23” better than Olivier Pain, hauled him up to 4th place in the general standings, just behind his nearest pursuer, the other main player in the scenes played out between Nazca and Arequipa. The Yamaha rider, who is always riding with a thirst for a first special stage win on the Dakar, has been rewarded for his consistency.

Pain has harvested the fruit of his labours on the Yamaha YZF (on which Verhoeven and Casteu are also riding good races) and his consistency since the start in Lima. He now takes hold of the first place in the general standings, with a lead of 2’24” over his team-mate David Casteu, who is riding a race in a similar vein. But what happened to Cyril Despres, the brief leader of the race? The four times winner opened the way throughout the day, choosing to ride in a restrained manner, at the cost of dropping back in the general standings. Though he moves down to 3rd position, 3 minutes behind Olivier Pain, he only has a lead of 2’29”over Barreda… who could be his main rival this year.

In the quad race, Marcos Patronelli won his third consecutive stage. He seems to have found a consistent rival in Sebastian Husseini, the only rider to be less than an hour behind him, 14’06” to be precise, after the first four stages. 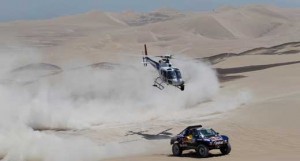 The battle plan of Nasser Al Attiyah has still not experienced a major hiccup. In spite of the doubts cast on his buggy’s capacities, he has been in the reckoning on all the stages. However, the task was by no means an easy one for the Qatari, since he had the responsibility of opening the way. The winner in 2011 was more than equal to this challenge and in Arequipa he picked up the 16th special stage win of his career on the Dakar. His roll of honour is becoming imposing, having now put Bruno Saby and Jean-Louis Schlesser in the shade! Al Attiyah could have been deprived of this little historical feat by Guerlain Chicherit, who led at the first two time-check points, only to slip in to second at the finishing line by only 36”. Behind the day’s two speed demons, Stéphane Peterhansel maintained a steady pace, without battling with Al Attiyah. His Mini reached Arequipa 1’17” behind the day’s winner, but this slight deficit has not moved him off the top of the general standings, where he leads Al Attiyah by 5’16”.

After 4 stages, an initial cull has been made amongst the challengers for a podium finish. Giniel De Villiers is still in with a chance, but nevertheless lags behind by more than 30′. The Minis driven by Leonid Novitsky and Nani Roma are also in the reckoning, just like Guerlain Chicherit. However, the situation is much more critical for Carlos Sainz, who has lost several hours in the Peruvian sands. Robby Gordon, who had his eyes on a Barreda style comeback, was stopped in his tracks when he rolled his car onto its roof following an over-optimistic manoeuvre, the American also losing several hours in the process. The day soon became a nightmare as well for Lucio Alvarez, when he broke down after 28 km. As a result, he can say goodbye to the third place in the general standings that he had been occupying.

In the truck category, Gerard De Rooy’s is no longer going solo out in front. The title holder encountered mechanical problems and two punctures, as well as some driving mishaps, getting stuck in the dunes for a prolonged period. In total, he lost almost half an hour on the day’s special stage, losing the command of the race to Ales Loprais. A genuine battle looks to be on the cards, because in addition to the Czech driver, the road to Arequipa saw the return to form of the Kamaz trucks. Nikolaev put his on the provisional podium, 7’08” behind Loprais, whereas Ayrat Mardeev, who won his first special stage on the Dakar, took 4th place, 18′ behind the leader. 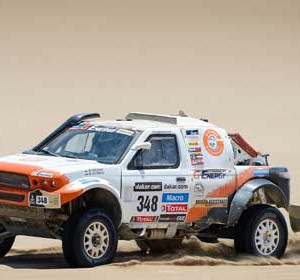 Stage 3’s day of dunes was always going to be hard and the competitors certainly weren’t disappointed. At the head of the field...
Copyright 2011-2016 Rallyraid.net - RISE Network. All Right Reserved.
Back to top