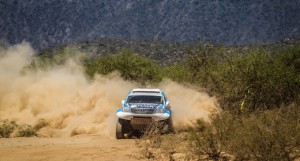 The competitors headed to the Northwest, to La Rioja, in the Catamarca Region, and left behind the humid tropical areas. For the tenth stage of the Dakar 2013, the WRC kind tracks of Córdoba were the main course of the meal, but also the infernal heat was part of it.

On the road, the old posts of an ancient railway were taken by small green and blue parrots to house their nests… Very fast, the pampa´s vegetation of Cordoba´s region was replaced by the cacti and the red dry ground. The atmosphere was like in the Western movies, with a perfume of the sand that surrounds it… for the delight of someone like Lucio, who likes better the sand, but nonetheless finishes in the sixth position today.

“The special stage was very similar to yesterday, tells Lucio, looking exhausted at the moment he arrived to the bivouac in La Rioja, after the long road connection and the heat wave. Stones, fast tracks, steering, but also lots of dust that was the day´s special in the menu. I had fan, I liked it, but we spent 60 km behind the dust of Khale, and that wasn´t nice!”

“I did honk the Sentinnel” (the alert system to show location from one car to the other when close), confirms Ronnie.On this WRC tracks it was impossible to take over anyone, the route had plenty of s-curves between stone walls. “At the end, I took risks to hit Khale, continues Lucio. I stood right next to him, and finally he let me go through, but it was hard!”

Tomorrow, temperatures will increase once again for the mythical special of Fiambalá. “It will be very hot, but we will be back on the sand, smiles Lucio… which is my favorite kind of ground… And the day after tomorrow we will be back in Chile, in the Atacama Desert for more fun in the dunes!” 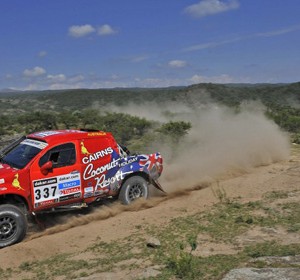