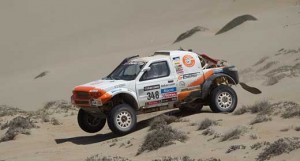 The Dakar is a brutal event and the odds for finishing, never mind winning, are stacked against even the best drivers. Today it was the turn of big names like Sainz and Gordon that failed but coming through the 288km of sand and rocks and massive drops G-Force’s Boris Gadasin came through to finish with a place in the Top 10.

Statistics say that only 10% of first-timers get to the finish of the Dakar… but how many of them get to have their names on such a prestigious leaderboard?

Boris Gadasin: “The stage was even more interesting than the previous. There was less sand, but we got stuck twice. The first time was my fault as I just didn’t manage to drive the car out but the second time we found De Rooy stuck in his truck and had to stop. But while there we lowered the tyre pressures and went on fine from there. When the sand ended we stopped to inflate the tyres some more and then headed to the finish.”

Alexey Kuzmich: “I agree, it was a more interesting day and harder as well. The stage kept changing and was very beautiful. On section was a 15km stretch of beach and we blasted along at the edge of the water at 160km/h scaring the pelicans and cormorants. A very nice picture and somehow it finally feels like the Dakar has started.”

But while those ahead fought with the terrain and the gremlins lurking in the mechanics Gadasin’s time was good enough to get him to 9th place overall. A massive achievment! 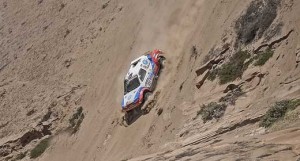 Vladimir Vasiliev had a shock yesterday when a sharp dune caught him out but the G-Force’s are tough cars and he carried on without damage, but a legacy of that incident meant that he started the next stage well down the order.

Vladimir Vasiliev: We had no problems today but starting the cars at 30 second intervals is not really the best idea as the dust has no time to settle and you can see absolutely nothing ahead. Like Boris we got stuck twice today, once when we almost hit a Chinese car that was stuck on a slope… but everything is OK. The most important thing is that we are still in the rally.”

Vasiliev lies just outside the Top 20 but unfortunately there is no news from Andrey Cherednikov’s. The car never made it out of the stage but the team are still not sure why… and it seems that they have become part of the 90% that don’t get to see the finish at their first attempt. 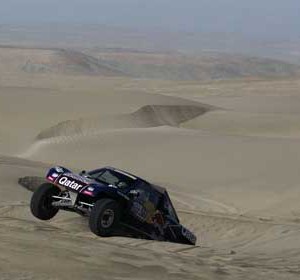 Nasser Al-Attiyah and navigator Lucas Cruz claimed a stage win for the second day in succession at the 2013 Dakar for the Qatar...
Copyright 2011-2016 Rallyraid.net - RISE Network. All Right Reserved.
Back to top