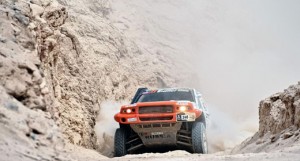 Both G-Force crews loved Stage 12 but unfortunately it wasn’t too kind to them. Because of yesterday’s stage cancellation the running order was quite mixed up which meant that Vladimir Vasiliev had to start from 38th place with all of the inherent dust and slower cars to deal with while Boris Gadasin had a little technical problem as well as two punctures… But despite the problems they managed to get to the finish in 12th and 14th places.

Alexei Kuzmich: “It was a great special stage with a very interesting and hard to navigate road. And the people watching are amazing! They don’t just stand in groups, they ride next to the track! But then in a river with big stones we hit a wheel and had to change it… and then the route took us up to the dunes about 1500 metres above sea level. Such beautiful scenery! Up there we caught up with Leonid Novitsky and just out of interest followed him for some of the way… and what a lesson! But 20km from the end we had another puncture and while we were changing it one of the KAMAZ’s passed us and because this ‘house on wheels’ made so much dust it was impossible to catch up and pass him, so we just stayed behind until the finish. If all the stages were like this the whole race would have been much more interesting.” 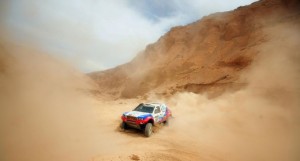 Boris Gadasin: “I don’t remember… what was that? It was like the whole stage passed in a minute! It was actually very interesting for me, sharp rocks, then soft sand and then back into the rocks again. And today there was some very unusual sand, a type I’ve never come across before and so in the dunes I was extra careful, driving neatly. We had a small problem with one of the fans which caused us to stop and fix it as well as the two punctures but we are doing what we planned to do, to go steadily and to see the finish!” 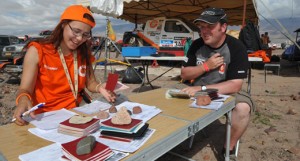 In the camp I managed to catch up with the team’s logistic manager, Marina Kosenkova, rocks on top of the piles of papers she was working through. For the first few days she had really bad flu but now she’s smiling again. “One thing for sure, it’s not just a big race! The drivers have their own Dakar, the one that everyone sees on TV but the assistant teams also have their own Dakar… and I guess that the organisers do as well, but it’s a personal journey for everyone and you certainly get to discover some things about yourself, especially your endurance limits. I also love getting to see new countries and people and the motorsport fans in Argentina are amazing! And some words that I heard our friend Michel Boucou are so true. Here you always have some problems, but you always find a solution for them!”

Something else that will please Russian fans is that KAMAZ now have a 1-2-3 at the top of the truck class tables, while both the G-Forces are now in the Top 20. Only 2 more stages between them and their goal of getting both the cars to the finish!