G-Force’s biggest successes have come in the shorter Baja style events rather than the long desert marathons. Boris Gadasin is 2 time Baja World Champion (2007 and 2009) and Vladimir Vasiliev took his first victory in the Italian Baja last year, so perhaps it was no surprise that on tracks more similar to the WRC than the previous pure sand stages they would excel. And 7th and 8th on a Dakar stage is definitely something to celebrate. 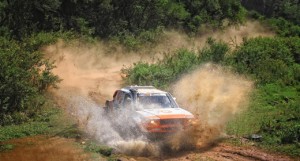 Boris Gadasin: “Like yesterday it was a good technical and interesting special stage. The first 10 cars leave the start at 3 minute intervals and because we started 12th there were only 2 cars in front of us that left at a minute interval, so the dust was much less. Also, ahead of us were much faster crews today so we didn’t get held up so much. We didn’t push too much but for the last 50km we got stuck behind some of the slower riders. They travel in big groups and so the dust is quite bad and you just can’t see anything at all. It’s a solid wall of dust, so the last part of the stage was continuous torture.” 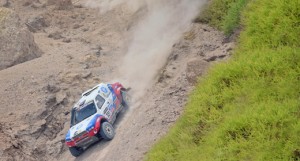 Vitaly Evtehov, co-driver for Vladimir Vasiliev: “Today was like a 350km long WRC stage but it was hard to keep a good rythym because the road kept changing. Some of it was wide and quite easy but then changed into narrow and twisty sections with stones on one side of the track and not on the other. For 200km we drove well as there was no dust but then Carlos Souza who had just changed a wheel saw us coming and jumped back in the car without even putting their helmets on to get in front of us. We turned the Sentinel on but they ignored it all the way to the finish and there was nothing we could do because the dust was so thick. But we didn’t get a puncture, so all is well.”

Stage 11 sees the return of the dunes and the emphasis turning back on the co-drivers for thier navigational skills. Leaving in the Top 10 G-Force have another chance to shine! Gadasin is only a minute away from a place back in the Top 20. 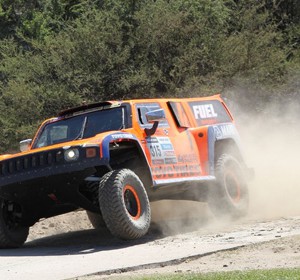 Stage 10 in this year's Dakar Rally was a much shorter stage than yesterday but featured much of the same narrow WRC-style...
Copyright 2011-2016 Rallyraid.net - RISE Network. All Right Reserved.
Back to top