The day before the finish in Santiago, “Chaleco” Lopez put in a first-class performance between Copiapo and La Serena to pick up his 4th stage victory in 2013 and more importantly to move into 2nd place in the general standings at the expense of Ruben Faria. It was also show-time in the car category thanks to Robby Gordon, who won his 2nd stage in 2013, just in front of Guerlain Chicherit. This was not enough to worry Peterhansel, who is still unmovable leader of the general standings, 44’38” ahead of De Villiers. 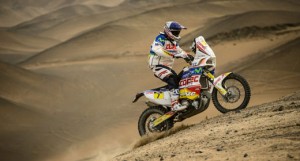 Chaleco festival! On home soil, it is well known that Francisco “Chaleco” Lopez is formidable. As proof, out of his 6 victories on the Dakar before this 35th edition, four of the triumphs were obtained in Chile. The motivation of national pride was all the stronger today since at the start of the 13th stage, the country’s idol was in a position to grab 2nd place in the general standings. Taking advantage of being the seventh rider to start, Chaleco let rip over the 380-km of the day’s special to leave the stopwatch smoking and pick up his 4th stage victory on the Dakar 2013 and his 10th overall in his career on the event… as well as his 6th on his native Chilean soil. At the finishing line, the Tamarugal Honda rider beat Frenchman Cyril Despres, 2nd today, by 5’25. He also put 5’29” between himself and Portugal’s Paulo Gonçalves, but most significantly beat Portuguese rider Ruben Faria, who finished in only 15th place today, by 14’27.

As a result, in the general standings, whilst Red Bull KTM rider Cyril Despres remains solidly in the lead, he witnessed “Chaleco” moving into 2nd place, 8’15 behind him, whilst Ruben Faria, the title holder’s water carrier, fell back into 3rd, 10’04 in front of Ivan Jakes.

In the quad category, although he opened the way today, Sebastian Husseini took advantage of being on his favourite terrain, namely wide open spaces, to put in the best time on the first section of the special. Unfortunately for him, the very quick terrain in the second section was more suitable to the powerful E-ATV ridden by Sarel Van Biljon. In the end, the South African grabbed his 2nd stage victory on the rally, 41” ahead of the Dutchman, who lives in the United Arab Emirates, and 48” in front of Ignacio Casale. Ensured of finishing 2nd in the general standings, the Chilean gained 2’11 on Marcos Patronelli, but the winner of the Dakar in 2010 is still in complete control and can leave the spotlight to the other riders, with a lead that stands at 1:50’24” in the general standings.

In the car category, as Robby Gordon announced following his 2nd place yesterday, the 13 stage was for him. The American kept his word, even if he found a worthy rival in Guerlain Chicherit. Attacking from the start to the finish of the 380 km of the day’s special, the two drivers were battling for seconds. Even if the “Bad Boy” in his Hummer triumphed for the second time in 2013, to claim the 9th stage victory of his career on the Dakar, it was only by 22 seconds ahead of the Frenchman’s SMG buggy. Behind them, the competition was not able to keep up with the pace. As a result, Giniel de Villiers, 3rd today, finished 8’08” behind the stage winner and 27” in front of Leonid Novitskiy, whilst Stéphane Peterhansel lost 13’51 to the American!

Nevertheless, in the general stadings, the Frenchman is solidly installed at the top of the leader board with an advantage of 44’38 over his only rival, Giniel de Villiers. There is a change, however, in 3rd place, because Russian Leonid Novitskiy climbs onto the bottom step of the podium, at the expense of Nani Roma.

Finally, in the truck race, Andrey Karginov, although opening the way throughout the day, tasted triumph for the second time this year, 2’48 in front of Gerard De Rooy and 8’04 ahead of Alès Loprais. This success enabled the Russian to claim 2nd place in the general standings from his team-mate Ayrat Mardeev, but he still lags 36’24” behind the unyielding leader and other Kamaz driver, Eduard Nikolaev. 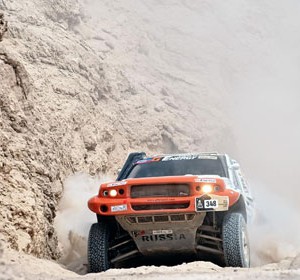 Both G-Force crews loved Stage 12 but unfortunately it wasn’t too kind to them. Because of yesterday’s stage cancellation...
Copyright 2011-2016 Rallyraid.net - RISE Network. All Right Reserved.
Back to top