Motorcycle rider no. 106 Thomas Bourgin (FRA) was the victim of a fatal traffic accident on the link route as he made his way to the start of the day’s special stage.

The accident took place at 08.23 hours local time on the link route on the way up to the Chilean side of the mountain range. The 25-year-old rider collided with a Chilean police car that was travelling in the opposite direction. The exact circumstances of the accident are being subjected to an inquiry.

The rally’s medical teams deployed on the ground were only able to certify the rider’s death, probably instant.

Thomas Bourgin, from Saint Etienne, where he was born on December 23rd 1987, was in 68th place in the overall ranking of his first Dakar. He had realised his passion since 2009 when he took part in the Morocco Rally, followed by a 4th place in the 2011 Africa Race and a 7th place finish in the Tunisia Rally.

The organisers of the Dakar and everyone involved in it express their great sadness to his family and friends and offer their most sincere condolences. 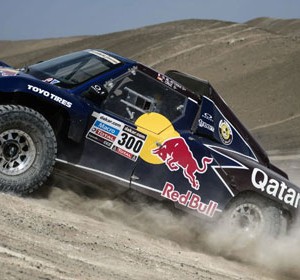 The blow of Carlos Sainz’s retirement was softened by Nasser Al-Attiyah making it five stage wins from a possible six for the Qatar...
Copyright 2011-2016 Rallyraid.net - RISE Network. All Right Reserved.
Back to top