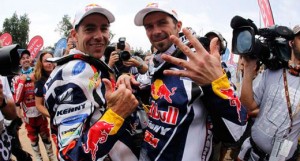 Frenchman Cyril Despres took his fifth Dakar after finishing 17th in the 14th and last stage of the 2013 edition, won by Chilean Francisco “Chaleco” López, which puts him on par with Cyril Neveu in the race’s palmarès and just one win away from Stéphane Peterhansel’s record. He can also pride himself on the fact that he helped his Portuguese lieutenant Ruben Faria onto the second step of the podium, rounding off a historic double for the KTM Red Bull Rally Factory Team. The car race saw another Frenchman celebrate his fifth win… on four wheels. Stéphane Peterhansel was crowned in Santiago, broke Ari Vatanen’s record for most wins in the car category and raised to 11 the bar for most Dakar victories overall.

Chaleco was betrayed by his motorcycle. Chile’s Chaleco López lost his fourth gear towards the end of the 13th stage, necessitating an engine change which cost him a 15-minute penalty and therefore pushed him back to third overall, 8′34″ behind Faria and, most importantly, a mere 1′30″ ahead of Slovakia’s Ivan Jakeš. With his podium spot in jeopardy and his honour hurt, the Chilean gave it his all in the last, 126-kilometre special. This was enough for him to win his fifth stage in the rally, 29″ ahead of Ruben Faria and 37″ ahead of his rival for the “best performer” title, Spaniard Joan Barreda.

But, at the end of the day, the Chilean’s last stand changed nothing in the overall classification, where the official KTM team’s dominance earned them a one-two. A master strategist on the course, defending champion Cyril Despres took his first back-to-back win and his third victory in South America (2010, 2012 and 2013) to go with his two wins in Africa (2005 and 2007). This fifth triumph puts him on par with Cyril Neveu in the race’s palmarès. In the end, he was 10′43″ faster than his lieutenant Ruben Faria, now the highest-placed Portuguese rider in the history of the Dakar, and 18′48″ quicker than local hero Chaleco López. Behind them, a great performance by low-key Slovak Ivan Jakeš: Mr Consistency finished fourth, 23′54″ back but more than 20′ ahead of fifth-placed Spaniard Juan Pedrero.

The winner’s iron grip on the race was also striking in the quad category. Marcos Patronelli finished third in the closing special, which saw South African Sarel Van Biljon grab his third win in 2013, to take his second Dakar after the 2010 edition and move within one victory from his older brother Alejandro, who didn’t participate this year. Even more striking was the fact that the Argentinean led the rally from the second stage and won it with 1 h 50′35″ to spare over Chile’s Ignacio Casale and 3 h 16′40″ over Poland’s Rafał Sonik. He was in a league of his own! 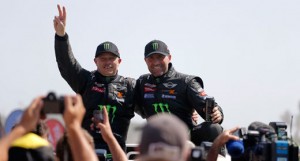 In the car category, the final stage saw Nani Roma take his fourth win in 2013, more than anyone else, by 13″ over Argentineans Orlando Terranova and Lucio Álvarez. Nevertheless, the Catalan’s ninth career win was not enough for him to topple teammate Leonid Novitskiy (seventh today) from the bottom step of the podium. The X-Raid team will no doubt be happy to take four of the top five spots and, most importantly, to defend the title won last year with an unbeatable Stéphane Peterhansel. The Frenchman tackled today’s stage just as cautiously as the rest of the last week to finish his 25th Dakar with no surprises and take his fifth victory in the car category, which is also his eleventh overall. Peter ended up beating the consistent South African Giniel de Villiers by 42′22″ and Russian Novitskiy by 1 h 28′22″.

Finally, the last special in the truck category saw Team Veka-MAN leader Pieter Versluis take his maiden Dakar win by 2′04″, but Team Kamaz’s collective strength was the star today! Karginov had a big scare and had to drive his truck to the finish on the front right rim, but that didn’t prevent the blue trucks from making it a one-two-three at the end of the 35th edition. Eduard Nikolaev conquered his first Dakar with 37′10″ to spare on Ayrat Mardeev, who finished fifth in today’s stage and moved just ahead (47″) of teammate Karginov to take second overall. Defending champion Gerard de Rooy missed the podium by 4′19″. 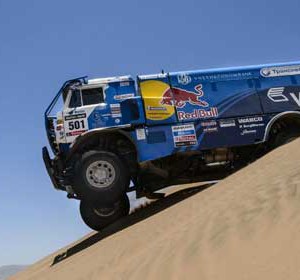 Flight in the journalistic plane to a place of the following bivouac, perhaps, is the only opportunity during Dakar to get off from...
Copyright 2011-2016 Rallyraid.net - RISE Network. All Right Reserved.
Back to top