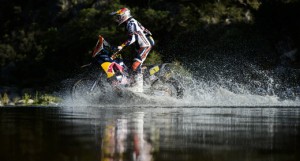 Red Bull KTM factory rider and title-holder Cyril Despres fought a close battle with Spaniard Joan Barreda in Stage 10 of the Dakar 2013 to finish just one minute 15 behind his rival. The French rider now to secure a narrow lead in the overall standings in front of factory teammate Ruben Faria of Portugal, who secured eighth place in the stage.

Despres, who is now looking settled and determined to go for his fifth Dakar title made the breakthrough on Monday when he won the longest stage in this year’s edition after an eventful first half of the rally. But he was quick to brush off suggestions that his luck had changed and told journalists it was much more “..about experience and preparation and training and bringing all the right elements together at the right moment”.

Speaking of Tuesday’s stage Despres said it was at ‘cruising pace’. “With a motivated Joan Barreda on my tail, you can’t slow down. I managed to keep the pace. The bike again worked well and suffered less than yesterday. The selective side is what makes the Dakar different and stand out when compared to all the other rallies. Picking up seconds in the general standings is not the most important thing. What matters is making statements, making a difference, gaining in confidence and letting the racing do the talking.” 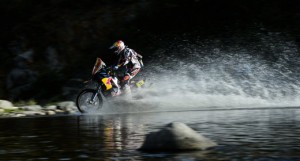 KTM factory teammate Joan Pedrero also delivered a strong performance in Tuesday’s 357 km timed special on the road from Cordoba to La Rioja in Argentina to finish in fourth place just four minutes 27 behind the stage leader. The team’s  Dakar rookie Kurt Caselli also delivered another great stage, finishing in fifth place – just under seven minutes behind Pedrero. The American trails in the overall standings after picking up a total of 3 hours 20 in penalties for missing checkpoints and waypoints in Stage Seven but continues to deliver impressive stage results.

Despres as Monday’s stage winner was charged with opening the road that offered Enduro-like terrain that was technically demanding, fast and physically tiring coming off the longest stage in the 2013 edition the previous day. And while the French rider kept a narrow lead for most of the special, Barreda was always close behind and made his attack in the latter part of the day’s times ride.

With the longest parts of the rally already under their wheels, riders face just 221 of timed special in Wednesday’s Stage Eleven with a total ride of 483 km that takes them from La Rioja to Fiambala on the Argentinean side of the Andes where they will again prepare for the attack on the dreaded Atacama Desert in Chile as the rally caravan heads back over the mountains towards the Pacific for the final push at the end of the week to the finish at Santiago.

Team manager Alex Doringer said that riders and teams were suffering from the extreme heat up to 43 degrees Celsius and warned that Wednesday’s stage will be hard for all. “Navigation will be very difficult and this is a stage that will be tough on both the riders and the bikes,” he said. 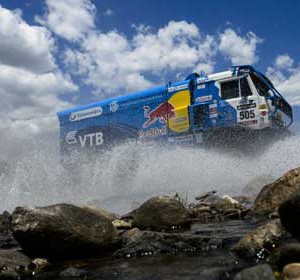