Eduard Nikolaev is a leader in trucks category at “Dakar” 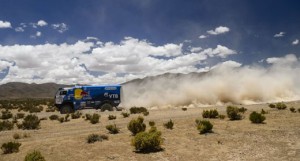 After a rest day in Tucuman Dakar competitors continued to move to the south-east towards Cordoba. From the journalistic plane there are wonderful views of the wide plains. Famous pampas – the patrimony of South American cowboys gaucho. Only on approach to Cordoba the terrain starts to change – the city is surrounded by picturesque hills covered with lush greenery. Gaucho, in whose veins blood of Indians and the first Spaniards flows, lived in dependence on wild cattle.

But, let’s come down from Argentine gaucho to Dakar’s gaucho. Competitors of trucks category started first from the bivouac – at 04:15 am, moreover, they had today their own route, other than the special stage of bikes and jeeps. Such an early start after heavy repair traditional for the rest day was sweetened only by the fact that the 293-kilometer special stage for trucks was more than twice shorter than for other rally competitors.

On the eve in Tucuman the “KAMAZ-Master” camp became kind of a center of the Dakar bivouac. Everything started with the activities arranged by RedBull. Qatari prince Nasser Al-Attiyah, the champion of Dakar-2011, and by the way the London Olympic Games’ silver medalist in shooting, came on a visit to Russians, the champion of Dakar-2009 South African Giniel De Villiers came together with him to greet Vladimir Chagin and, after them there were a lot of guests till the evening.

We talk to the nine-time winner of the golden Dakar’s Bedouin Stephane Peterhansel, we want to know if it is too much the 22-minute gap of the leader in trucks category Gerard de Rooy from the nearest crew of Eduard Nikolaev? “Considering the fact that only half of the race passed, it’s nothing at all” – the famous Frenchman answers.

As a proof of his words there is today’s report from the road. As a result of technical problems, almost immediately after the start the truck of Gerard de Rooy stopped – turbine breakage and problems with the steering. As a result, the Dutchman lagged behind the winner of a stage Ales Loprais for 1 hour 25 minutes.

Czech pilot wins his fifth stage in his career at Dakar; only seven seconds Peter Versluis at MAN conceded to him. The pilot of KAMAZ-master Andrey Karginov showed the third time (+00:01:36).

The head of team Vladimir Chagin, despite that situation, is not satisfied with the guys:

– Ayrat Mardeev and Eduard Nikolaev crews gave a lot of their time to rivals today. The stage was difficult: dusty, narrow, absence of the possibility to overtake. Of course, there is insufficient experience, big responsibility and as a result, caution. I understand them and I hope that at following sandy stages they will feel more confidently and will be unreserved in manner.

By the evening, there were a lot of journalists at team’s bivouac. Serious team – serious editions. L’Equipe in yesterday’s issue devoted to “KAMAZ-Master Red Bull” a full page. English DailyMirror is preparing to release a great article about a Russian sports phenomenon.

Dakar is not over, but unanimously sportsmen and media are interested in the dates of the Silk Way Rally 2013. Europeans’ interest in Russian race can be explained by the convenient dates and proximity to the venue of the rally. Even Argentine motorcyclists want to participate at Silk Way – 2013! The willingness to participate in the “Silk Way-2013” has already declared Stephane Peterhansel, Nasser Al-Attiyah, Ales Loprais, Gerard De Rooy, Giniel De Villiers and Peter Versluis with the MAN team. Year by year, the competitors’ interest from CIS grows. The fifth race of the “Silk Way” series is going to be more interesting than all the previous ones.

Sport is not just a sport. For example Dakar – this rally has become a powerful tool of international cooperation. Tourists coming to Argentina, Chile and Peru after four races held in America increased many times! Sponsors are fighting for places on the sides of the sports car. Participation in Dakar, for example, seems to have become the state program of China – there are a lot of sportsmen and journalists in South America from Greater China. Luckily Russia is well represented in the international rally world – we have “KAMAZ-Master”, there is also Silk Way Rally, private Russian teams are going now to Dakar. The main thing is to continue to pedal, not to fall off the bicycle. 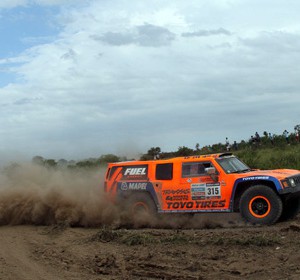 Following a much needed rest day for teams, today's stage from Tucumán to Córdoba was one of the toughest and longest of this...
Copyright 2011-2016 Rallyraid.net - RISE Network. All Right Reserved.
Back to top