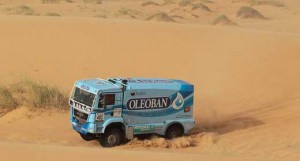 Elisabete Jacinto is still fighting for a podium place at Sonangol Africa Eco Race 2013. In the seventh stretch of the race, between Chami and Akjout, Team Oleoban/MAN Portugal finished fifth among trucks and is now third in its category.

Mauritanian sands proved to be very complicated for the Portuguese team, which took about nine hours to complete today’s selective sector. The Lusitanian team managed to set a good pace at the first few kilometers of the special, but a sand storm, with very strong winds, developed in the region of Akjout and checked the Portuguese team, who remained in na area of dunes for about two hours.

Elisabete Jacinto still aims at finishing among the first three in her category: “today the stretch was complicated. The first few kilometers were very fast, and we managed to drive well. However, the last 100 kilometers were rather difficult. The course was on very soft sand, and we became stuck several times. We are tired. We spent hours digging but we were able to finish. Tomorrow we resume the race, and we are to try and recover”, was her comment.

Tomorrow Sonangol Africa Eco Race 2013 continues in Mauritania. The eighth special will be a boucle around Akjout. Sand tracks are still part of the course and they ar accompanied by several successions of oueds, which will undoubtedly make life difficult for the drivers. Navigation won’t be easy in this special with 320 timed kilometers. 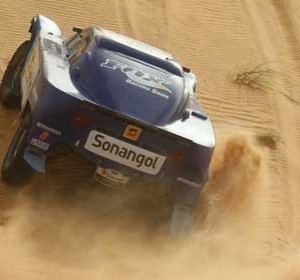 As expected, the first real Mauritanian stage in the Sonangol Africa Eco Race was the least gratifying for both the bikes...
Copyright 2011-2016 Rallyraid.net - RISE Network. All Right Reserved.
Back to top