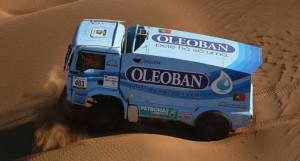 At the sixth stage o Sonangol Africa Eco Race 2013, Elisabete Jacinto confirmed the runner-up position among trucks when she obtained another second place in her category at the end of today’s 161 kilometers timed special.

Team Oleoban /MAN Portugal, which completed the first stretch run in Mauritania in 1h41m27s, is now about 1h19m ahead of Tomas Tomecek, the third in the category. In general, Elisabete Jacinto is still in the top 10, now in seventh place in the car-truck joint classification. The Russians of Kamaz official team keep the leadership in the category.

Due to the characteristics of the Mauritanian stretches, mostly consisting of soft sand tracks, the competition MAN TGS will have added difficulties in this course. Elisabete Jacinto, José Marques and Marco Cochinho are going to find more obstacles in the fight for second place in the category, and therefore they are going to be at the center of a fierce contest with the Czech from Tatra.

Elisabete Jacinto is happy with the way things started in Mauritania: “today’s stretch went on well. It was a very fast selective sector, and it only allowed the engines to heat, since we had few timed kilometers. Though I kept a good pace, I already felt some difficulties. The ground is very soft, and I never managed to get to 150 km/h. Today the navegation was rather complex but, once again, José Marques showed that he is capable of meeting the challenge”, declared the race driver when she got to the camp.

Tomorrow there is the seventh stretch of Sonangol Africa Eco Race 2013. Mauritania is still the scenery for this big marathon. The special is going to be a long one, with 437 kilometers timed between Chami and Akjout. 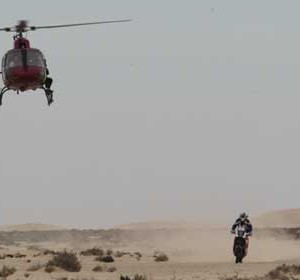 After a well deserved rest day by the Atlantic in Dakhla, the participants of the Sonangol Africa Eco Race hit the road to Mauritania...
Copyright 2011-2016 Rallyraid.net - RISE Network. All Right Reserved.
Back to top