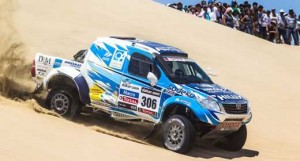 07:05 a.m. the heat was already there at the bivouac in Pisco. Lucio Alvarez and Ronnie Graue approach their Toyota Overdrive to go to the start of the special section. The picture is historical: Carlos Sainz (Buggy), Lucio Alvarez (Toyota), Nasser Al Attiyha (Buggy), Guerlain Chicherit (Buggy SMG), Ronan Chabot (Buggy SMG)… San Rafael´s driver imposed himself with his 4×4 over all the buggies yesterday.

But there is not one day like the other in the Dakar, and today Lucio and Ronnie obtaine the seventh place in the 242 km special, 13’45 from Stéphane Peterhansel (Mini), stage winner in front of Giniel de Villiers (Toyota) and Ronan Chabot (SMG). The special was a loop 100% in the sand, rather difficult in navigation. It was the first true Dakar stage.

Started second, behind Carlos Sainz, at km 74 the “Mendocino” driver was behind the leader… on the tracks of the bikes. Ronnie realized quickly and they were able to correct their bearing without losing too much time.

“The special stage was really beautiful, tells Lucio at the arrival of the bivouac in Pisco. There were beautiful dunes, fast portions, woops… It was fun as special, except that we went to a parallel road that we were not supposed to take.

Then, on a jump, we landed a bit on the side, and the rear tire lost air, we lost time changing the tire, and 2 km from the finish line, the rear right tire lost the air, but we did not stop. The mechanics of Overdrive are now working and checking the differential, which made s suspicious noise.”

Tomorrow the Dakar continues towards the South by Nasca with a special stage of 288 km. 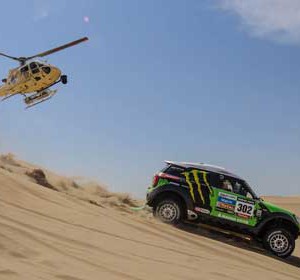