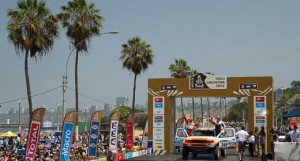 For the story that’s about to be told over the next 16 days through the South American sands and mountains the 2013 Dakar has an amazing list of characters. The legend that is Stephane Peterhansel in his MINI ALL4, which despite what the sticker on the back of the Hummer says, is definitely not just for girls, will be looking for an almost unimaginable 10th victory.

The Desert Demon himself, Robby Gordon, will surely be driving through a red mist after last year’s accusations, especially as he lost 10 minutes getting stuck on a dune in the short 13km prologue! Both former winners, the dynamic duo of Carlos Sainz and Nasser Al-Attiyah, who gave us so much entertainment a few years ago, are back in the same team again although they have exchanged their all conquering Touaregs with a pair of rear wheel drive buggies. (And a bit of inside information about these Red Bull sponsored buggies… they’re going to be insanely fast!).

Away from the headline grabbing fireworks will be the quietly fast Toyota Hi-Luxs of Gilles De Villiers and the quickly improving local driver Lucio Ezequiel Alverez. Ex-Cross country world champion and ex-X-Raid MINI driver Guerlain Chicherit should also be one to watch in his SMG buggy.

And somewhere in the mix will be the G-Force team… or maybe they won’t as they are a team who know well how many days of despair there are on the way to glory. In the 2012 World Cup for Cross Country Bajas they were hobbled by niggling reliability issues and disasters like Vladimir Vasiliev managing just 40km of the Pharaons Rally in Egypt and Boris Gadasin’s very contentious penalty at the hands of the Portalrgre 500 organisers which cost him victory… Yet the year was crowned with an incredible Silk Way Rally win as well as victory in the FIA World Cup for teams… and the start of 2013 sees them enter the mighty Dakar 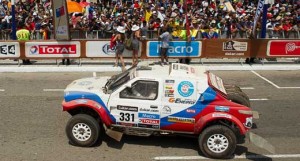 But even just getting to the start in Lima, Peru was a victory in itself as the logistics involved in getting the cars rebuilt after the Pharaons and Portalegre 500 then shipped to the other side of the world was a logistical nightmare with several problems threatening the whole effort. Fortunately the team have Marina Kosenkova pulling strings and bullying lethargic suppliers and it was wide smiles as they ploughed through scrutineering in the Lime Dakar circus. Gadasin’s co-driver, ex-Kamaz driver Alexey Kuzmich who took 3rd overall in the truck category last year was blown away by the enthusiasm. “While we were waiting for our turn on the start podium I went to the spectators, signed their hands, posters, photos and never before have I seen such a motorsport fervour like there is here in South America! Every small village, every crossroads… everywhere is flooded with people!” Some official estimates put the number of specators on from the start to the prologue some 250km south at near a million.

13km of a wide open strip of sand was all the crews had to sort out the running order for Sunday’s first stage and the G-Force crews intended to just take it easy. Vitaly Yevtyekhov, co-driver for Vladimir Vasiliev, had this to say. “It was all sand and small dunes and we drove carefully without a single jump. We’ll get into the race bit by bit to be able to find our own tempo. This is our first time at Dakar so we need to be very careful!” Although the tempo was turned up quite nicely on the very next stage… Vasiliev came in 12th sandwiched between some very illustrious company, Sainz in front and Gordon right behind! Gadasin drove a well-paced stage and finished in a solid 15th after not taking any risks. 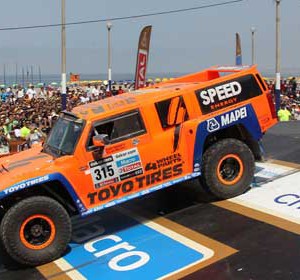 Today marked the start of the 2013 Dakar Rally and the first time that it has started in Peru since it moved to South America....
Copyright 2011-2016 Rallyraid.net - RISE Network. All Right Reserved.
Back to top