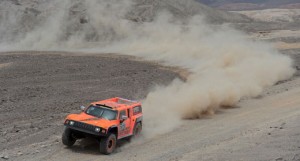 The Dakar Rally entered Argentina today, the third different country in this year’s race. Robby Gordon and navigator Kellon Walch captured their third consecutive third place finish. Gordon is staying consistent with the leaders of the Rally despite being hours behind due to the rollover during Stage 4. Knowing that he could be sitting in the top-3 of the overall standings provides Gordon with the drive he needs, to make up as much time as possible each remaining day of the Dakar Rally.

“Today was another good special for us. The SPEED Energy / Toyo Tires / MAPEI HUMMER was fast, and I am kicking myself because we could be sitting third overall in the Rally right now if I had not messed up. Every time we finish well, it is like twisting the sword we had already stabbed ourselves with. We are not third, so we’ll accept it and chip away in the standings and search for that first stage win. There are other guys that could make a mistake and have a bad day too. We just hope that we are there to capitalize when they do,” Gordon commented shortly after completing the stage just one minute and eight seconds behind Peterhansel, the winner.

Tomorrow’s Stage 8 will continue in the countryside of Argentina, heading towards Tucumán being one of the Rally’s longest Specials. Competitors will face a 152KM liaison to start a 471KM Special finishing with a 228KM liaison to the bivouac in Tucumán. What lies ahead are some tricky tracks with dusty trials along the beautiful landscape of Argentina. Drivers must be prepared for weather conditions as rain and wind are likely to play a factor in who ends up on top of the podium. 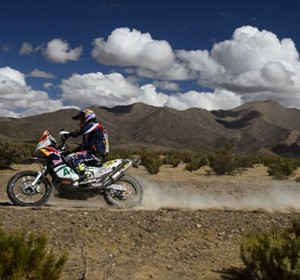