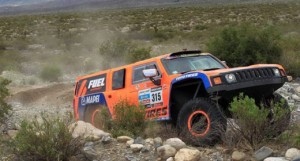 Stage 8 in the 2013 Dakar Rally continued in Argentina, taking competitors from Salta to Tucumán. Initially, it was suppose to be one of the longest specials in this year’s race comprising of a 152KM liaison to a 471KM Special then another 228KM to the bivouac. Due to today’s weather conditions, the Special was shortened by more than half, resulting in only 188KM of competition.

Robby Gordon, driver of the SPEED Energy / Toyo Tires / MAPEI HUMMER jumped into the lead early and maintained a fast pace bouncing between first and third place. During the last 40KM, Gordon suffered a puncture in his tire and lost five minutes. Dropping from second to third, he crossed the shortened finish line 5 minutes and 17 seconds behind today’s winner. Gordon entered the bivouac with a third place finish, his fourth consecutive third place finish. This finish could possibly change overnight while the organization is actively looking into today’s situation to determine a course of action.

Due to inclement weather across the area, many competitors could not cross the rivers due to flooding. As of now, it appears that the organization will be using checkpoint 2 area as the cutoff for the stage completion. Should they do this, Gordon would finish second, only 13 seconds behind today’s winner. The bivouac is certainly buzzing tonight as many top drivers have yet to come in for service after the stage. Gordon continues to chip away at the overall standings, moving up a little more each day.

Tomorrow is Rest Day where competitors are given a day to work on their cars and not race. Team SPEED will be prepping the HUMMER for the final six days of this year’s Dakar Rally still hoping to capture their first stage win in 2013. 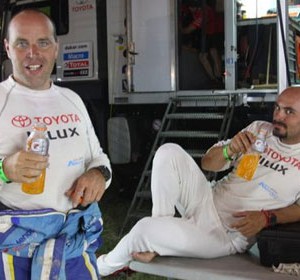 The arrival of the Dakar to Argentina has not been simple at all, and today again, heavy rains created issues in the race. Yesterday...
Copyright 2011-2016 Rallyraid.net - RISE Network. All Right Reserved.
Back to top