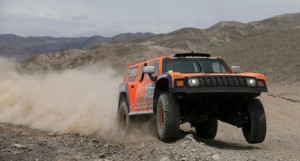 On the final day of the 2013 Dakar Rally, Robby Gordon and Kellon Walch set the pace to start Stage 14. However, the SPEED Energy / Toyo Tires / MAPEI HUMMER finished the 114KM stage in 6th place; the American duos first finish outside the top 5 since Stage 4.

The Rally consisted of ups and downs for Gordon as a driver and Walch as a navigator. No matter the outcome of the stage, the two continued to battle capturing 8 podiums and 2 stage wins in the world’s toughest off-road race. After the roll over on Day 4, Gordon knew that continuing with the Rally would help overall in developing the HUMMER to make it stronger to come back in 2014 to capture the ultimate goal in an overall win.

“I’ve made mistakes this year, and I’m extremely proud of my team. We have had zero mechanical issues and zero flats thanks to a great partner in Toyo Tires. Also, I want to say thanks for all the support from MAPEI, 4 Wheel Parts, Traxxas and SPEED Energy. My team never got down when they knew we were out of it. They kept their heads together and worked hard to achieve two stages wins. We will be back next year!”

Gordon completes the 2013 Dakar Rally 14th overall, finishing with his signature donuts for hundreds of fans waiting to greet him. The team is ready for some needed rest after several days of camping in the desert. However, next up for Gordon of his many off-road adventures state-side will be the Best in the Desert Parker 425 on January 31st – February 3, where he will return in his no.77 SPEED Energy / Toyo Tires Trophy Truck, followed by the King of the Hammers event on February 6 – 9th. 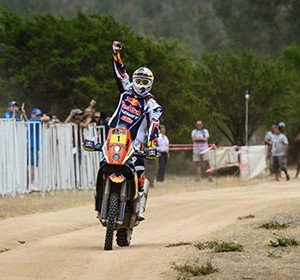