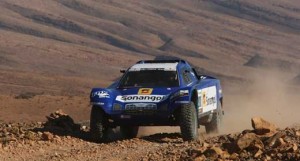 Winner of the Special the day before, Jean Louis Schlesser therefore left again in first place with the disability of having to open the track, which means being more prudent and maintaining very precise navigation. On a particularly long Special, 433 km, not making any mistakes is obligatory at such a high level of competition but it’s also very tiring! There was a huge stretch of sand on the program, a kind of Everest in the dunes, the Erg Chegaga to the East of M’Hamid, then over 200 km of track where driving would be extremely complicated. The buggy passed the dunes with no problems, even though a two wheel drive vehicule is normally more difficult to get through the sand, then the hiccup arrived as Jean Louis Schlesser explained…

“For the sand, it’s true that two wheel drive isn’t an advantage. On the other hand, I have a little experience and that helps… It was as we were leaving the dunes that it all went pear shaped. Whilst trying to avoid a huge, very high trial section, I ended up on the wrong track. I had to do a U-turn and then I realised that it was impossible to engage the reverse gear. We were also on a slope… By the time we’d free it up and got back on the right track, our biggest rival Jérôme Pélichet, had twelve minutes over us… “

“And so then you hit the gas, a lot of gas! Was your teammate Cyril Esquirol scared? Did he say anything?”

“It was necessary to push hard but Cyril is really motivated, never says anything and also didn’t make any mistakes. I knew that it was a long Special and we were flat out everywhere the whole time. In top speed, I got up to 214 km/hr! We got back to Pélichet in his Toyota after 270 km and then, while maintaining maximum pressure, we managed to gain more time. Despite being at the top of the general classification we now only have eight minutes of advance. This isn’t a lot and so the fight will continue and that’s what we all like…”

The fourth stage on Tuesday will still be in Morocco and will take the rally to Oued Draa at Gwirat Larjam. It will be shorter, only 343 km of racing, but very tiring without much sand and a lot of gravel with some trial sections. The race director René Metge told us that there will be some very difficult parts. Here again we are on the exact path of Thierry Sabine and the spirit of the Sonangol Africa Eco Race. 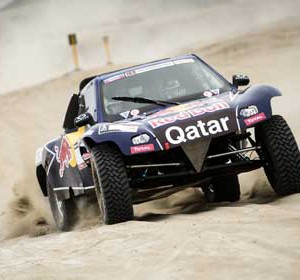 With the start of the 2013 Dakar Rally just days away the Qatar Red Bull Rally Team took a trip to the Peruvian Desert to finalise...
Copyright 2011-2016 Rallyraid.net - RISE Network. All Right Reserved.
Back to top